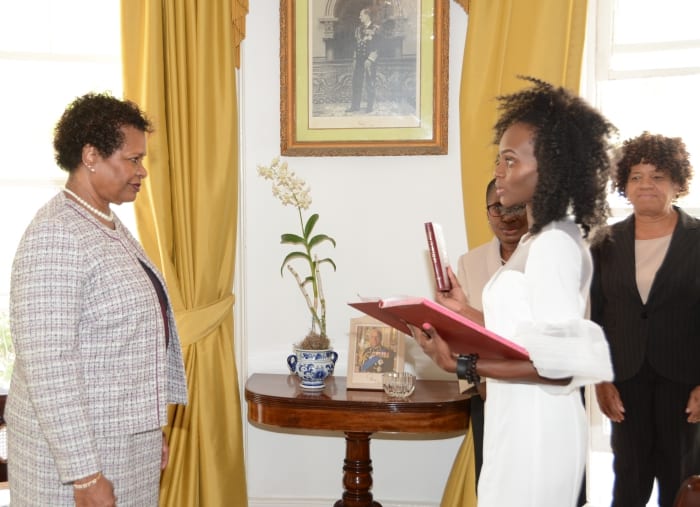 Transitioning Barbados to a green economy will be high on the agenda for newly sworn-in Opposition Senator, Crystal Drakes.

Ms. Drakes, an economist with a background in environmental studies, took the Oath of Office this afternoon before Governor General, Dame Sandra Mason, during a brief ceremony at Government House.  She was accompanied by fellow Opposition Senator, Caswell Franklyn, and her parents Rodney and Ingrid Drakes.

Cognisant that the Ministerial Statement or “mini-budget” was in progress as she took her Oath, the 30-year-old Senator outlined the areas she hoped Prime Minister and Minister of Finance, Mia Amor Mottley, would give priority.

“From an economic standpoint, and more so a holistic standpoint because of my background in environmental studies, I am curious to see if she will include anything regarding the transition to a green economy and pushing that agenda forward, as well as any opportunities as it relates to the youth,” she stated.

The new Senator added that measures outlined in today’s “mini-budget”, such as the repealing of the National Social Responsibility Levy and replacing the Road Tax with a fuel tax at the pump, would have to be assessed “going forward” to see what implications they would have “in conjunction with any other measures” on revenue collection.

Her appointment satisfies the two-Senator constitutional requirement for the Opposition in the Upper House.