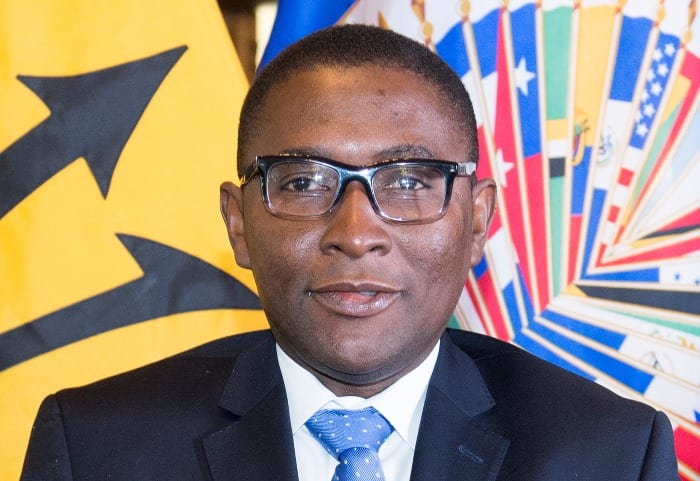 Barbados’ Ambassador to the United States of America (USA) and Permanent Representative to the Organisation of the American States (OAS), Selwin Hart. (Photo compliments the OAS)

Senior Foreign Service Officer in the Barbados Foreign Service, Selwin Hart, has been appointed Ambassador to the United States of America (USA) and Permanent Representative to the Organisation of the American States. He replaces John Beale.

Since joining the Ministry of Foreign Affairs in 1995, Mr. Hart has served at home and abroad. He was posted as Counselor at the Permanent Mission of Barbados to the United Nations (UN), where he was responsible for Economic and Financial Affairs.

He also served as the Chief Climate Change Negotiator for Barbados, and as the Coordinator and Lead Negotiator on Finance for the Alliance of Small Island Developing States, a coalition of 43 islands and low-lying coastal states in the Caribbean, Pacific, Africa, Indian Ocean and South China Sea.

The diplomat was a member of the Kyoto Protocol Adaptation Fund Board from 2009 to 2010, and was elected by the UN General Assembly to serve during its 60th Session of the UNGA as Vice-Chairman of the 2nd Committee, which is responsible for economic and financial matters.

Mr. Hart was seconded to the Caribbean Development Bank (CDB) from 2012 to 2014, in the capacity of the Climate Finance Advisor in the Office of the Vice-President (Operations).

He was responsible for positioning the CDB to better mobilise climate finance from international sources to support the Bank’s interventions in the areas of climate resilience and low carbon development in the region.

From 2014 to 2016, Mr. Hart served as the Director of the United Nations Secretary-General’s Climate Change Support Team (CCST).

He was responsible for providing advice on climate change to the Secretary-General in his engagements with Heads of State and Government and other senior officials during the critical negotiations for the Paris Agreement, ratified by Barbados this year.

His responsibility included providing overall supervision and guidance to the Secretary-General’s (SG) Climate Change Support Team in the implementation of the SG’s second-term Five-Year Action Agenda.

According to the Ministry of Foreign Affairs and Foreign Trade (MFAFT), Mr. Hart has already taken up his duties this month on the completion of policy briefings.

See also:
Tags: Ministry of Foreign Affairs and Foreign Trade, Permanent Representative to the Organisation of the American States, Selwin Hart, US Ambassador