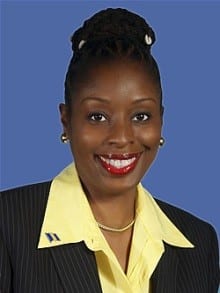 Senator Irene Sandiford-Garner was born in the United Kingdom of Barbadian parents and has lived in Barbados since the age of 8.

She holds a post-graduate Diploma in Management and an MBA from the University of the West Indies Cave Hill Campus; qualifications from the Chartered Institute of Marketing, UK; and the Credit Union National Association of America (CUNA). She also studied journalism at the Virginia Commonwealth University at Richmond on a scholarship from her then employers, the Nation Publishing Company, Barbados.

A staunch credit unionist, the Senator spent her latter 10 working years with the Barbados Public Workers’ Co-operative Credit Union Ltd., Barbados largest credit union, initiating their launch into the United States in 1996 and facilitating the creation and introduction of financial products and services.

Mrs. Sandiford-Garner was appointed to the Senate in February 2008 as Parliamentary Secretary in the Ministry of Culture and Community Development. She was subsequently assigned to the Prime Minister’s Office and became the country’s Principal Delegate to CIM (Inter American Commission of Women) in August 2008.

Senator Sandiford-Garner assumed the portfolio of Tourism and International Transport on February 28, 2013, having previously served as Parliamentary Secretary in the Ministry of Health.

Senator Sandiford-Garner has participated in the 25th Regional Women of the Church of God Symposium; UNIFEM workshop in Trinidad & Tobago “HIV/Aids and Sex Workers In the Region”; delivered the feature address at the Caribbean Institute of Women in Leadership launch; was sole discussant in UNIFEM panel/interview re: “Women in Local Politics”; featured speaker for the 2009 International Women’s Day symposium organised by the National Organisation of Women (NOW) and she recently opened a National Organisation of Women (NOW) Symposium on The Global Recession: Its Impact on Women and Children.

In early 2010, Senator Sandiford-Garner was invited by the CIM to represent the Caribbean Community (CARICOM) at a round table discussion hosted at the Organisation of American States (OAS) headquarters in Washington DC to launch the Inter American Year of Women. In 2011, she was elected to the post of Vice President of the CIM by her peers from Latin America and the Caribbean.

She also represented her country at the European Economic Commission (ECCLAC) XI Regional conference on Women in Latin America and the Caribbean held in Brasilia, Brazil 13-16 July 2010. In early 2011 she presented Barbados’ report to the United Nations Commission on the Status of Women at UN Headquarters, and participated in a workshop on behalf of the CIM for young women in St. Vincent and the Grenadines.

A prolific writer, the Senator, as a freelancer, authored a popular weekly column entitled Candidly Speaking which appeared in the island’s widest circulated daily for seven unbroken years before her active participation in local politics necessitated its conclusion in 2006.

Senator Sandiford-Garner and her husband own two businesses and are parents of two young men aged 23 and 19.