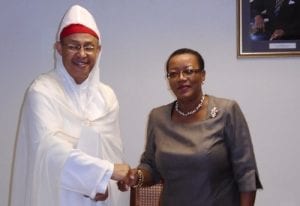 They discussed at length, the possibility of introducing an exchange progamme with Barbados’ local university and those based in Morocco, which would seek to bring students to the island, for a period six months to even a year.

Ambassador Kadmiri also suggested that it was best for the institutions to come together and sign some form of understanding on the arrangement.

During their discussions, Dr. Kadmiri also expressed an interest in cooperating with Barbados in other areas and explained that although he is based in St. Lucia, he hoped both parties would be able to pursue areas of mutual interest.