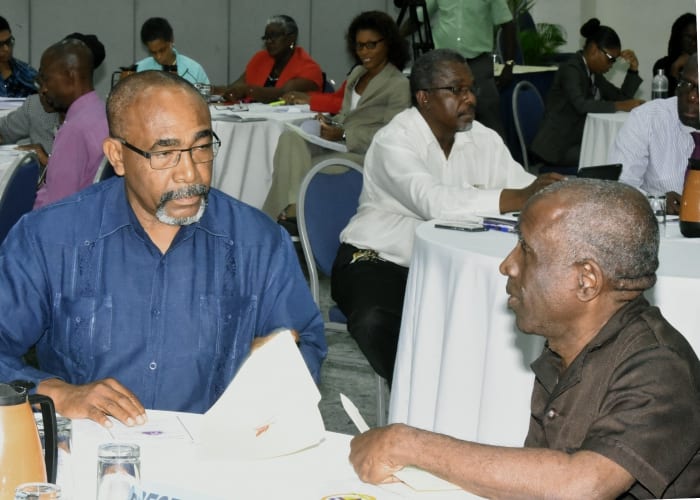 Senior public servants have been reminded that they are the de facto managers of Government business who are responsible for planning, designing and implementing strategies to serve the good of the country.

This reminder came today from Permanent Secretary in the Training and Administration Division (TAD), Esworth Reid, as he delivered remarks at a three-day High-Level Strategic Review and Planning Meeting Workshop, at the Lloyd Erskine Sandiford Centre.

Mr. Reid said there was no secret that, very often, Barbadian public servants come under very heavy scrutiny and harsh negative criticism by members of the public.  “Some of the criticisms are justified and some are unjustified and unfair…. How often have you heard complaints that it is almost impossible to get business done when dealing with the Barbados public service?

“This is not the kind of public image that senior public servants and managers of the system like ourselves can choose to ignore. This is even if it is a false image that is being painted of us…. I must say, however, that it would be hypocritical of me if I were to say that all the negative criticisms we hear from time to time are unjustified; for, as in the case of any other place of business, the public service does have its challenges and challenges that can be easily addressed,” he stated.

The Permanent Secretary told the senior public officers that it was up to them to change that image and address challenges by identifying and removing any restrictive obstacles along the way.

He expressed the view that it would call for strong commitment on the part of public servants to do so. According to him, public servants, led by their senior managers, must render the best service possible when called upon to do so.

Mr. Reid stressed that senior managers in the public service must be forward-thinking in the execution of their duties. He noted that the three-day workshop represented the Division’s commitment to building an effective and forward thinking public service, that is committed to periodic self-examination.