Barbados’ 50th Anniversary of Independence celebrations will move into high gear soon, and Prime Minister Freundel Stuart is urging all Barbadians and friends of Barbados at home and abroad to participate in the activities.

Mr. Stuart made the call today during a press conference at Ilaro Court to discuss the 50th Anniversary of Independence activities.

He said the country’s achievements thus far were worthy of celebration. “We must ensure that our people know and appreciate the sacrifices that were made by countless Barbadians at all levels to chart the course for us to arrive at this milestone. It is our responsibility to chart an even better course for those who will follow,” he stated.

The Prime Minister noted that the activities would commence with the annual Lighting Ceremony on Tuesday, November 1, in National Heroes Square, beginning at 5:30 p.m. He urged all home owners and businesses to “literally light up in the national colours” so Barbados would be a sea of ultramarine and gold.

There will also be an exhibition entitled: The Road to Destiny: Barbados at Fifty – Pursuing the Road to Independence, at the Barbados Museum and Historical Society, The Garrison, from November 2016 to January 2017.

A theatrical production entitled: Mirror, Mirror, Show Me a Hero, will be held at the Frank Collymore Hall, from November 17 to 26. Mr. Stuart explained that the production would be dedicated to the late Dame Nita Barrow, who, if she were alive, would have been 100 years on November 15.

“Dame Nita was a trail blazing pioneer who spent her life in the service of others, and her work was the catalyst for much positive change locally, regionally and internationally. Mirror, Mirror, Show Me a Hero builds on that legacy by a futuristic depiction of the search for oneself in music and in drama,” he stated.

The Barbados Food & Rum Festival, one of Barbados’ premiere annual events, will run from November 17 to 20. On November 19, the 2016 Parish Independence Programme will climax with the Spirit of the Nation Show at Kensington Oval, and Mr. Stuart encouraged all Barbadians to support their parishes and the Parish Ambassadors.

He added that on November 20, the 50th Anniversary of Independence NIFCA Gala would be held at Kensington Oval. He noted that it would be dedicated to the youth and attendees would be treated to an evening of culture, through the eyes of the nation’s children.

According to him, it would also highlight a number of the award winning pieces from the last 42 years of NIFCA performances. 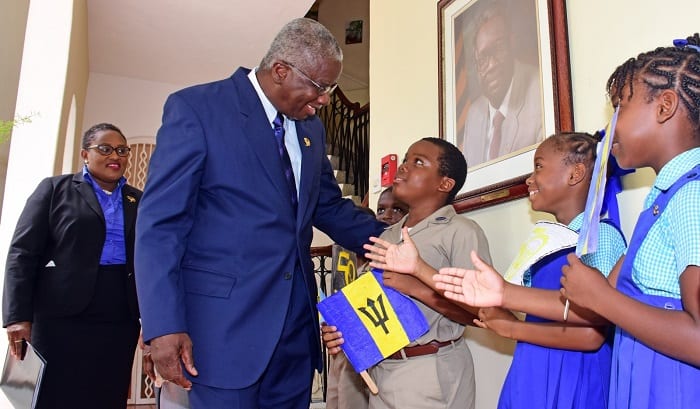 Prime Minister, Freundel Stuart greets students on his way to a press conference at Ilaro Court. The briefing was to give an update on the activities for the 50th Anniversary of Independence. To the left is Permanent Secretary, National Independence Secretariat, Gabrielle Springer. (C.Pitt/BGIS)

There will be an elegant cocktail reception entitled: Nostalgia! An Evening of Barbadian Elegance, on Tuesday, November 22. This signature event, the Prime Minister explained, is intended to bring together Barbadians from all walks of life to spend an evening at Ilaro Court.

“We will pause to remember our past and to look to the future with anticipation, as we continue to write our names on history’s page with pride and industry.  It will be a cultural journey of our music, fashion, talent and cuisine, a defining showcase of the people of Barbados for the people of Barbados,” he stressed.

He pointed out that the Prime Minister’s Dinner and Ball would be held on November 25, at Ilaro Court. He disclosed that the 50 Golden Jubilee Awards recipients would be honoured at the black tie affair, which would feature excellence in Barbadian cultural creativity.

On November 27, the 50th Anniversary Service of Thanksgiving will be held at Kensington Oval, beginning at 4:00 p.m. A Human Chain Link involving school children will be held on November 28 and members of the public and private sectors are being encouraged to participate.

The finale of the celebrations, Mr. Stuart stated, would be the three-part 50th Anniversary of Independence Celebrations Golden Spectacular.

He disclosed that there would be a short impactful televised public ceremony to reveal the 50th Anniversary of Independence National Monument, at The Garrison Savannah, on November 29, from 10:30 p.m.

An enhanced military parade will follow on November 30, at 8:00 a.m., and a cultural spectacular and concert in the evening, beginning at 8:00. International superstar Rihanna, supported by a choir of children from various schools across Barbados, will sing the National Anthem at the event.

The full speech by Prime Minister Freundel Stuart on activities for Barbados’ 50th anniversary of Independence may be downloaded here.