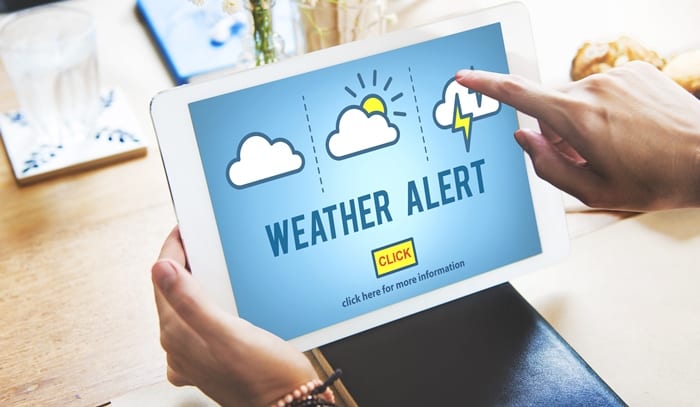 A severe weather statement has been issued for Barbados, as the Barbados Meteorological Services (MET Office) continues to monitor the progress of two tropical waves to the south-east of the island.

The statement, which was issued today, Monday, July 17, at noon, indicated that the wave closest to the island had an area of low pressure located about 700 miles east south-east of the Windward Islands, and was moving west to west-northwest at about 15 mph/24 km/h.

The associated shower and thunderstorm activity continues to show some signs of organisation, but the system appears to lack a well-defined centre at this time.

However, the statement cautioned that environmental conditions were marginally conducive for some slow development before the system reached the Lesser Antilles.

“Regardless of development, pockets of moderate to heavy showers, periods of rain, thunderstorms and occasional gusty winds are likely to spread across the island late Tuesday into Wednesday,” the statement read.

It added that rainfall accumulations of one to two inches (25 to 50 mm) were possible along the path of the system, and swells of 2.5 to 3.0 metres (8 to 10 feet) were also likely.

The MET Office stated that an Air Force Reserve reconnaissance aircraft was scheduled to investigate the first wave this afternoon if necessary.

Meanwhile, the second wave is projected to take a more north-westward track away from the island chain. However, weather officials gave the assurance that they would continue to monitor both systems.

This information will be updated as conditions warrant it. Meanwhile, this and other information may be obtained from www.barbadosweather.org, www.agriculture.gov.bb, or by calling 976-2376.

Click here for the latest bulletin from the Barbados Meteorological Service.