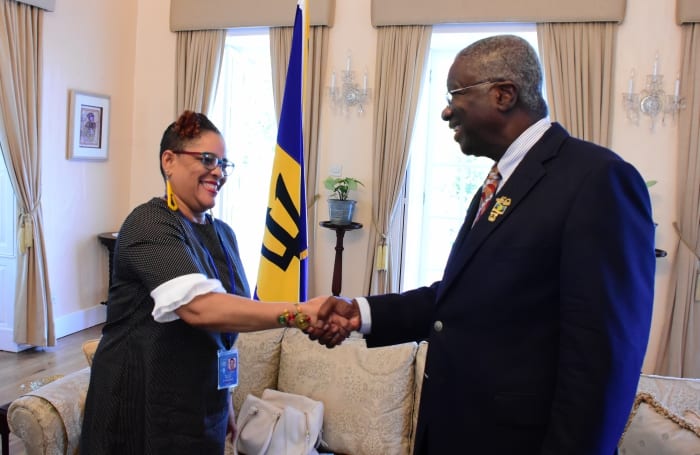 Sexual harassment legislation in Barbados has been completed and should be implemented by year-end.

News of this came from Prime Minister Freundel Stuart during a recent courtesy call at Ilaro Court with the newly-appointed Head of the UN Women Multi-Country Office in Barbados, Mary McLean.

While congratulating Barbados on its reporting on CEDAW (the Convention on the Elimination of All Forms of Discrimination Against Women), Ms. McLean had listed the pending legislation as one of three outstanding areas for immediate attention.

The other areas, she said, were training for public sector workers and public service administrators in gender mainstreaming to assist in the implementation of the Sustainable Development Goals (SDGs), and the development of a national gender policy and action plan.

Mr. Stuart spoke of Barbados’ efforts to address the issue of violence against women, highlighting the Domestic Violence Protection Orders Act 1992, which, he said, was designed to give victims of domestic violence easier access to the courts as well as the right to be heard within three days by a magistrate. Since his administration has been in power, he added, extensive amendments had been made to the legislation “to give it some teeth”.

He also highlighted the fact that men and women were paid equally for equal work, and that the rights of women in common law relationships were protected by legislation.

There was also a social protection network in place, he said, which allowed women, even when unemployed, to be able to provide for their children as well as offering them protection when having to deal with “deadbeat fathers”.

Prime Minister Stuart applauded the work being done by UN Women and looked forward to collaborating with the agency whenever the opportunities for such collaboration arose.