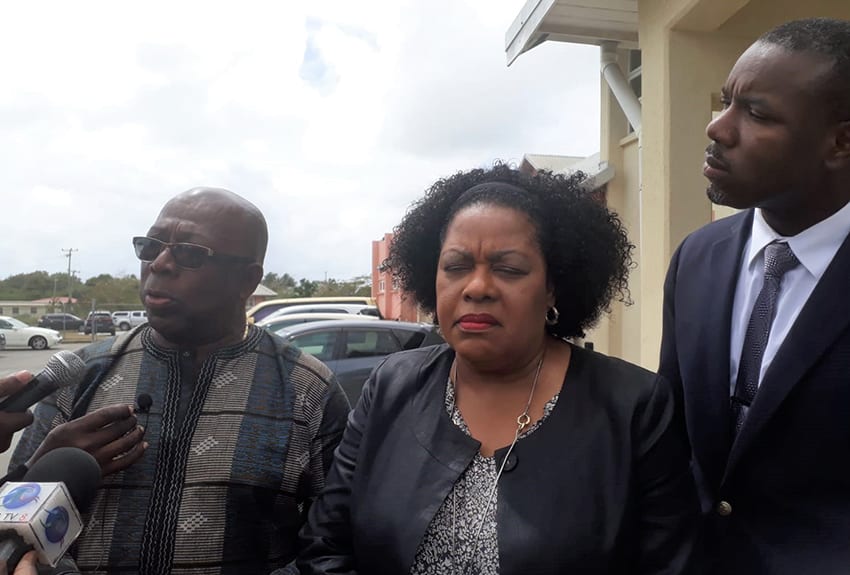 Minister of Environment and National Beautification, Trevor Prescod, speaking to members of the media at the Blackman and Gollop Primary School this morning. Looking on are Acting Minister of Education, Senator Lucille Moe and Parliament Secretary in the Ministry of Education, Dr. Romel Springer. (S.Forde/BGIS )

A short-term action plan has been devised and will be implemented starting tomorrow to address the cow itch situation at Blackman and Gollop Primary School.

During discussions this morning at the Staple Grove, Christ Church school, Minister of Environment and National Beautification, Trevor Prescod, and Acting Minister of Education, Technological and Vocational Training, Senator Lucille Moe, agreed that the cow itch situation needed an emergency response and work would be carried out to minimize the impact on the school.

Minister Prescod said: “Tomorrow, Saturday, February 16, at 9:00 a.m. work will be carried out to the eastern side of the school.  What we have finally agreed on is that we would scrape the surface of the entire land. The arrangement is that we would not go below four inches of soil, so that we can remove all the seeds, the pods and plants in their entirety…

“And to dig a number of trenches away from the eastern side making sure the trenches are deep enough and place the material in those trenches, and then the trenches will be covered over by mould or whatever material we deem is necessary to make sure that we keep [the cow itch] material as far down as possible….”

Senator Moe, speaking about what would occur after completion of the work on Sunday evening, said: “Once that work is completed, clearly the Ministry of Education, Technological and Vocational Training will ensure that the school and its environs are properly cleaned, because of course our first priority is always to the children, the staff and the other workers at the Blackman and Gollop Primary School.

“Now we know that this is not a long-term solution; it is certainly a solution for the short-term, but we can’t afford to have any more loss of school time, certainly not at this time of the year.”

Noting that this was the most viable action plan at present, Minister Prescod stated that the suggestion of burning the cow itch, whether controlled or otherwise, was not advised by the Barbados Fire Service.

According to Fire Officer, Earnle Fields: “Burning is not a viable option simply because the seeds are not going to be displaced.  They are going to drop to the ground and the whole cycle is going to return, so you will have new plants and the cycle remains.  In addition, the wind factor from burning would scatter the irritants of the cow itch.”

A decision was also made to address the cow itch situation on a national scale and to seek to implement a long-term solution that is not harmful to people and the environment.