Significant Progress Made On US-Funded Project 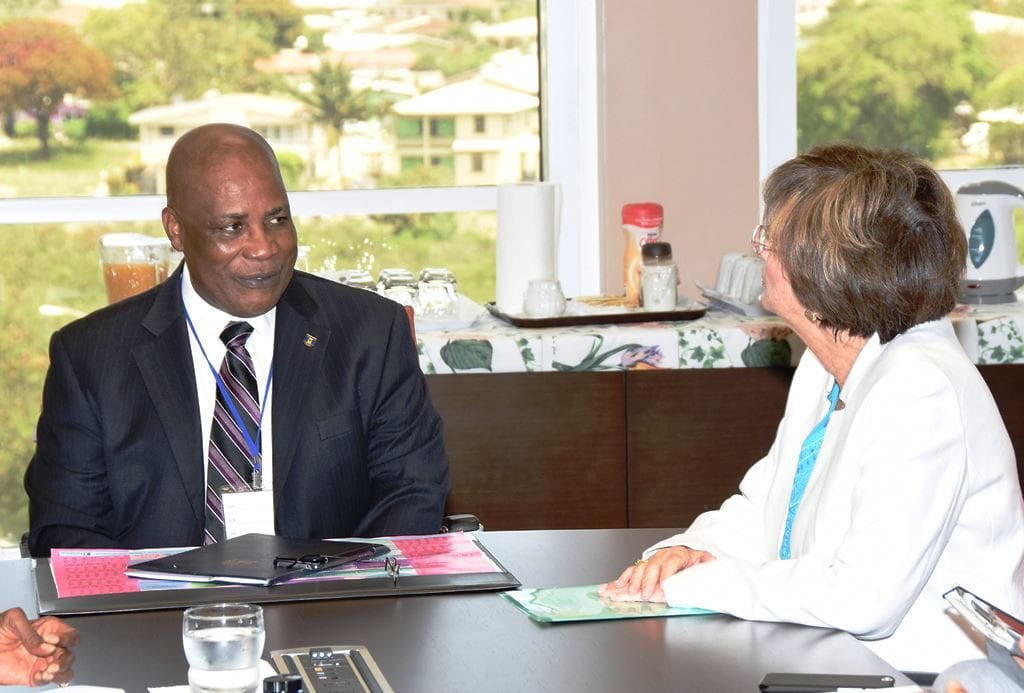 Minister of the Environment and Drainage, Dr. Denis Lowe in discussion with US Ambassador Linda Swartz Taglialatela during a recent courtesy call at his office in Warrens. (C.Pitt/BGIS)

This is according to Project Manager in the Project Management Coordination Unit of the Ministry of the Environment and Drainage, Ricardo Marshall, who provided an update to Minister Dr. Denis Lowe and other Ministry officials during a courtesy call with US Ambassador Linda Swartz Taglialatela recently.

The Project which is concentrated in the Trents and Holetown, St. James areas is currently at the implementation stage.

Mr. Marshall explained that it was designed to develop adaptation measures to counter the effects of climate change with a key focus on water resource management and flood resilience.

To date, he said, the reports for the Holetown Lagoon, Holetown and Trents, St. James area were ready, while the study components of the project were started along with work on the watersheds.

“We are looking to evaluate the reports on the watersheds and rank them,” he said, noting that the final reports for those areas should be submitted by November. He added that this would be followed by the selection of entities to carry out the engineering work on the project.

Mr. Marshall cautioned that there was likely to be some disruption with the dredging of the Holetown lagoon, but stressed efforts were being made to minimise the impacts as much as possible.

“We will be speaking to the hoteliers and business houses to find out the best times,” he said, noting the area was very tourism based and work needed to be correlated with the high and low points of the season.

Minister Lowe noted that it was not an easy project, as it was one with a number of dynamic situations. However, he stated that the long term benefits would provide significant benefits to the area over time, including a reduction in flooding.

Ambassador Taglialatela thanked the Ministry team for its update and said she would look forward to the conclusion of the project.