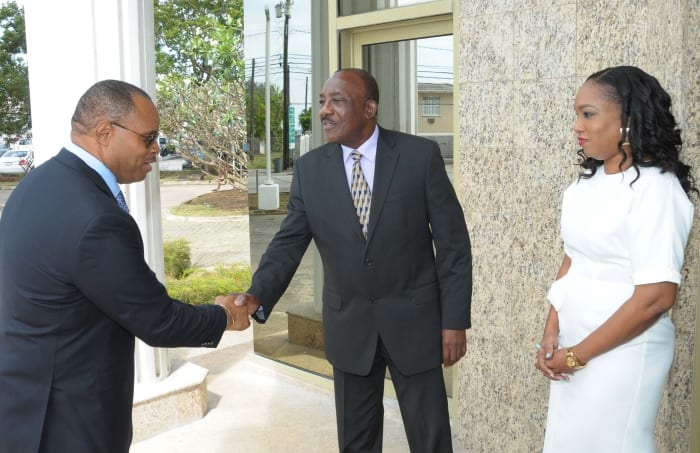 Minister of Finance and Economic Affairs, Christopher Sinckler, greets Resolution Life Executive Chairman, Clenell Goodman at the start of a tour of their offices at Worthing Centre today. Looking on is Chief Executive Officer at Resolution Life, Cheryl Senhouse. (B.Hinds/BGIS)

Some policyholders have started to receive payments on some of the instruments they had with the old CLICO, which is now being managed by Resolution Life Assurance Company Limited.

Mr. Sinckler said payments were made from March 1. “We are elated that finally payments are being made, [so] we are coming good with our promise to make our policyholders whole again. It has been a long wait and much suffering… We do apologise for the length of time that it has taken but some of those matters were beyond our immediate control, as CLICO International Life was under judicial management, supervised by the court and we had to follow those processes to the stage where we are at now,” he noted.

Chief Executive Officer of Resolution Life, Cheryl Senhouse, added that on average, the payment to the annuitants was about $400,000 per month and payments were made for January and February of 2018.

“Thereafter, we will be ensuring that current payments to those policyholders remain on track and that the backlog of amounts that is owed to those persons is settled within the six-month timeframe that we originally would have outlined,” she explained.

Mr. Sicnkler stated that he was happy that Resolution Life, which deals with the portfolio instruments under CLICO; and New Life, which is an asset management company, had been established and were under excellent management.

He said Government had played a critical role in ensuring that the companies had gotten to this stage and opined that it should be congratulated for stepping in and filling the breach.

He noted that not many countries in the world would have attempted this type of exercise. “In fact, when companies fail internationally, in many of the countries that we admire, … the depositors or policyholders usually don’t get bailed out, they usually have to take the bad end of the stick. Barbados has a slightly different tradition….

“We feel that Barbadians who…are encouraged to invest and save, should be given every opportunity to benefit from those investments and savings, and where any failures occur, even though they may not be caused by Government, Government still has a fiduciary responsibility to its citizens to ensure that some value which could potentially be lost is retained,” he explained.

Describing the 25 members of staff as driven and focused, Mr. Sinckler said they intended to provide a trusted insurance product to Barbadians, that was transparent and would be dispensed with integrity.

He gave the assurance that the substantial changes Government made to the regulatory system would greatly assist and expressed the view that going forward, a situation similar to what occurred with CLICO would not be repeated.

The Finance Minister also disclosed that the second phase of the restructuring would include the Organisation of Eastern Caribbean States.