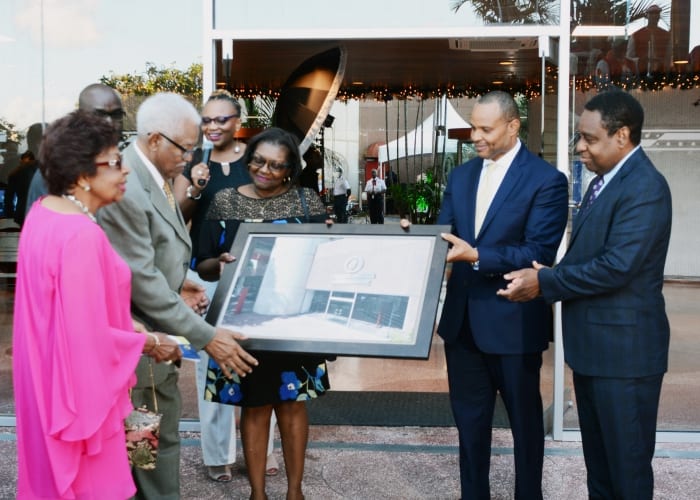 Barbados’ first Central Bank Governor, Sir Courtney Blackman, has been hailed for his exemplary leadership and for carving out an economic model for Barbados, in the few years after Independence, that transformed the island into a modern society and economy, with the naming of the Grande Salle at the Tom Adams Financial Centre, in his honour.

Sir Courtney, whose pioneering leadership was lauded last Friday evening in a ceremony at Frank Collymore Hall, was instrumental in establishing the Central Bank of Barbados – an outstanding edifice at Church Village, of which Barbadians can be proud, despite the fact that early beginnings were marred by controversy surrounding its cost and the no-show of some parliamentarians, at its officially opening.

Friday evening, however, belonged to Sir Courtney as in the presence of his wife, Gloria, Lady Blackman, relatives, friends and former work colleagues; he was recognised by Minister of Finance and Economic Affairs, Christopher Sinckler, as “among the island’s finest citizens” ever produced, over the years.

Describing him as a “pioneer in management, leadership, scholarship and pure humanitarianism” here and abroad, Mr. Sinckler told the large audience he was more than an individual. The Minister noted that over the many decades Sir Courtney served Barbados and the international community, he was “veritably an institution”, with the island benefiting from his expertise, wisdom, leadership and vision.

Noting that today, we take for granted the contribution of the Central Bank to the economic discourse on the island, he placed Sir Courtney’s legacy in context.  He pointed out that when in 1972, Sir Courtney assumed the governorship at the age of 39; Barbados had been politically independent for fewer than six years.

“He therefore had the dual responsibility of building a first-rate Central Bank from the ground up and navigating the economic minefields of the day, as he played a pivotal role in helping to shape the modern Barbadian economy,” stressed Mr. Sinckler.

Referring to the Central Bank as “a beacon in the region”, the Finance Minister added that Sir Courtney and a dedicated staff built it through nurturing “a resilient, fit-for-purpose economic model” that led persons to seek his guidance in economic matters beyond these shores.

The Minister further stated that as a result,  Sir Courtney “left an indelible mark on the country’s economic landscape, as many experts in the field still speak of his leadership of the bank with warm acclaim and admiration”. 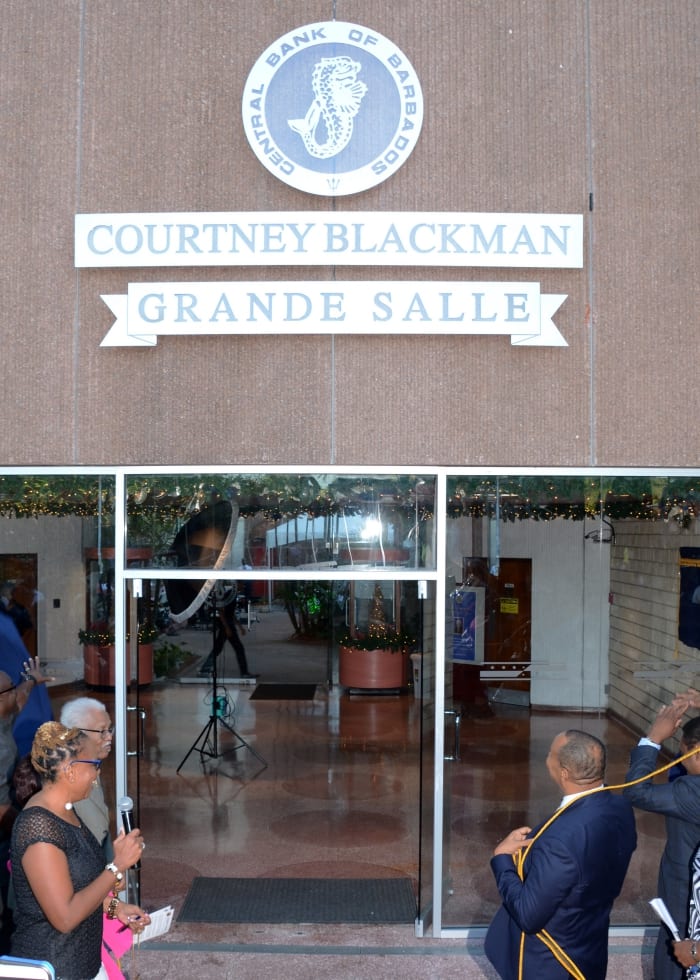 Three broad areas of stewardship were highlighted by the Finance Minister as he outlined Sir Courtney’s contribution to national economic development. Firstly, it was noted that the outstanding economist was “very forward thinking” and often took bold economic initiatives in the furtherance of the island’s development.

Mr. Sinckler recalled: “Under Sir Courtney’s leadership, Barbados issued its own currency, heralding the end of our association with the Eastern Caribbean Currency Authority, and signaling to the rest of the world, our readiness to singlehandedly manage our monetary affairs. Sir Courtney recognised from early that as a small open economy the policy options were limited, and the initiatives which larger economies pursued did not necessarily fit our size.

“We therefore, had to chart our own course, and this he undertook with fortitude, conviction, and a very clear vision. In this regard, management of interest rates deviated from text book models and the policy toolkit was broadened to include monetary policy instruments such as reserve requirements for banks and selective credit controls.

“We pegged our dollar to the US dollar at a rate of BDS$2 to US$1 delinking Barbados from the Pound Sterling, as the value of the latter weakened as a reserve currency asset, and as our traditional trading partners shifted.”

Acknowledging that the determination of the exchange rate was jointly handled by Sir Courtney and the late Prime Minister, now National Hero, the Right Excellent Errol Walton Barrow, Mr. Sinckler noted it was a “futuristic step” that demonstrated “boldness and courage” on their part.

Further elaborating on Sir Courtney’s stewardship, the Finance Minister said the pioneer was known to fully support any initiative he felt would enhance the island’s national economic development and competitiveness. Two examples cited were: Sir Courtney’s advocacy for the International Business Financial Services Sector, said to be our number two foreign exchange earner, and the establishment of the credit guarantee scheme that helped our manufacturers break into export markets.

Both initiatives, contended Mr. Sinckler, had made a difference to the path of economic development and even saw the Bank heavily investing its own financial and intellectual resources to buttress these strategies. The Central Bank also assumed responsibility for educating stakeholders and marketing and promoting regional markets for our products. 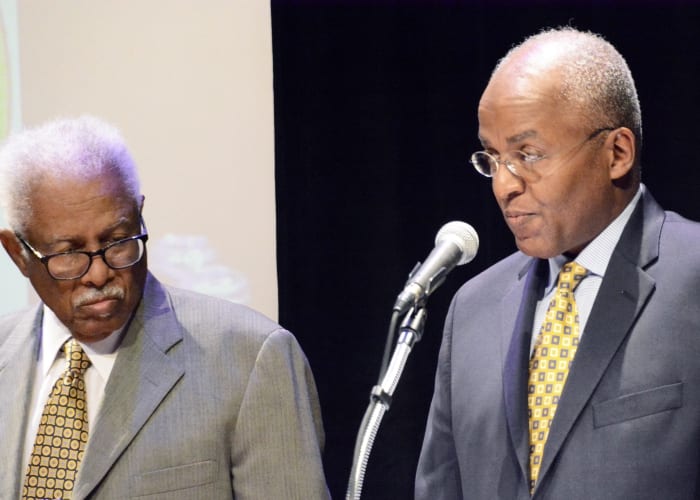 The Minister credited this emphasis on public education to Sir Courtney’s stewardship, noting his sustained and versatile strategy in this regard included Bank publications, research presentations, press conferences, and economic data.

“Not one to shy away from robust discussion, he was known to intervene consistently in many an economic debate, most notably, the issue, so controversial, as wage restraint. We owe him credit for our people’s in-depth understanding of economics, and for the ease and comfort with which every Barbadian debates the subject,” said Minister Sinckler.

Eighty-four-year-old Sir Courtney was educated at St. David’s Boys’ and Foundation school before completing a degree in economics at the University College of the West Indies. He later followed this up with postgraduate and doctoral studies at Columbia University Graduate School of Business, NYC, where he majored in Money and Banking with a minor in International Business.

He began his career as an Associate Economist with the Irvine Trust Company of Wall Street and was the first black person to hold such a position, from 1968 to 1971. In 1972, he became the first Governor of the Central Bank of Barbados, serving three terms until 1987.

Years later, in 1995, he was appointed Barbados’ Ambassador to the United States of America and the Organization of American States in Washington D.C. where he operated as Barbados’ lead official in the Free Trade Agreement of the Americas negotiations.

In 1998, the well-respected and sought after economist had the accolade of Knight of St. Andrew bestowed upon him, in recognition of his contribution to Central Banking.