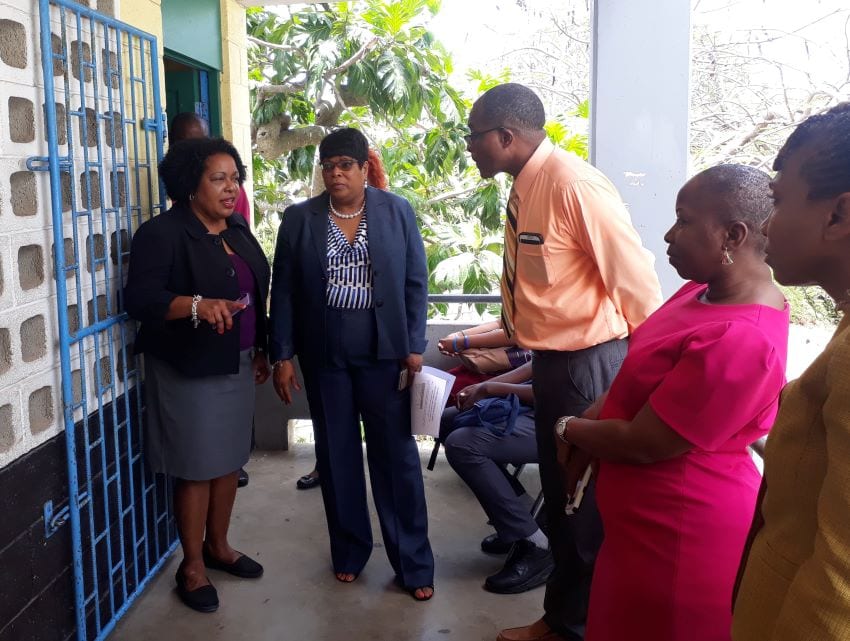 Education officials reported a smooth start to the Barbados Secondary Schools’ Entrance Examination (BSSEE) today, as over 3,300 students sat the exam, which will determine which secondary schools they will enter in September.

A touring party, which included Acting Minister of Education, Senator Lucille Moe; Chief Education Officer, Karen Best and Permanent Secretary, Janet Phillips, visited a number of the 22 exam centres around the island to ensure that all systems were in place.

Minister Moe said she was pleased with what she had seen on her visits to some of the schools.

“The Common Entrance Exam has been around for a very long time. People know the procedure, and they are clearly experienced in ensuring that things go well. From what I’ve seen, they have gone well.  Students were doing their exams; the schools were well prepared. Of course, you would have the anxious parents outside waiting. At Graydon Sealy [Secondary School], I was there during the break when they had lunch and some parents would’ve brought lunch for their children while I was there, so it went well.

“We will probably do a few more schools just to make sure that everything is going well and to ensure that there are no issues, but there are none that have been reported to us…,” Senator Moe stated.

The acting minister also expressed best wishes not only to the pupils sitting the annual exam, but their parents as well.

“I wish all of the children that sat the exam today the best of luck, and I hope the parents themselves don’t get too stressed out about it.  Anytime there is an exam, it is always a difficult situation, whether it is Common Entrance or any type of exam. Exams are part of education.  I think that most students, as they go through their lives, will discover that exams are a part of the whole educational system,” Senator Moe explained.