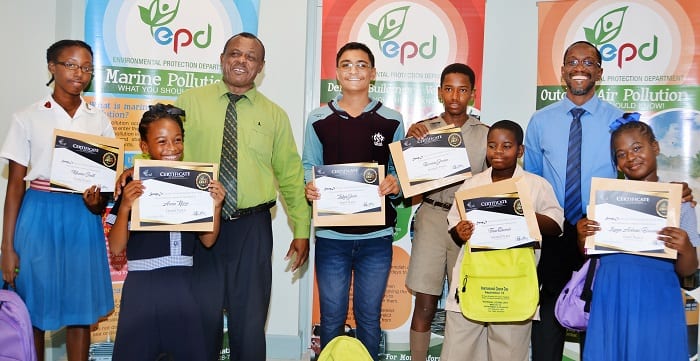 Permanent Secretary in the Ministry of the Environment and Drainage, Edison Alleyne (third left) and Acting Director at the Environmental Protection Department, Anthony Headley (second right), pose with prize winners of the SnapIt Photo-Essay competition. (B.Hinds/BGIS)

Some of Barbados’ best kept environmental secrets were captured on camera by students participating in the SnapIt Photo-Essay competition.

This is the view of Permanent Secretary in the Ministry of the Environment and Drainage, Edison Alleyne, who, after a review of the top entries, stated that “Barbados remains one of the most picturesque places on earth with its beautiful beaches, interesting cultural sites and captivating landscapes”.

He made these comments on Wednesday during a ceremony to award students who participated in the SnapIt Photo-Essay Competition, which was hosted by the Environmental Protection Department (EPD).

During his address, Mr. Alleyne said he was heartened that Barbados’ young people recgonised the importance and value of the environment, and that everyone was responsible for keeping it healthy. “Your responsibility is to carry on with the lessons that you have learnt from participating in the competition,” the Permanent Secretary advised.

He urged the students not to allow their passion for the environment to end, but to encourage their parents, friends, teachers and classmates to take the necessary measures to protect and maintain a healthy and productive environment.

“Remember, you are the environmental stewards of the future and the next 50 years of Barbados’ history will be in your hands,” Mr. Alleyne said.

Acting Director at the EPD, Anthony Headley, said photography made people stop and think about their subject in order to compose and communicate a particular message. Noting that the protection of the environment was not just Government’s responsibility, Mr. Headley said it was important that everyone shared the value of the importance of protection.

In the eight to 11 category, Lianne Downes of Hindsbury Primary captured the first prize; Torian Edwards of the All Saints’ Primary, the second prize; and Arona Nurse of St. Judes Primary, third prize.

Jeresha Bovell of Ellerslie Secondary School came first in the 12 to 15 category; Dominic Jordan of Harrison College was second; and Rhianna Smith of Deighton Griffith Secondary School came third. The lone entrant in the 16 to 18 category from the Barbados Community College, Zuhair Jada, captured the first prize.

Winners received a variety of prizes, including tablets, cameras, and trips on the Atlantis Submarine and Island Safari.