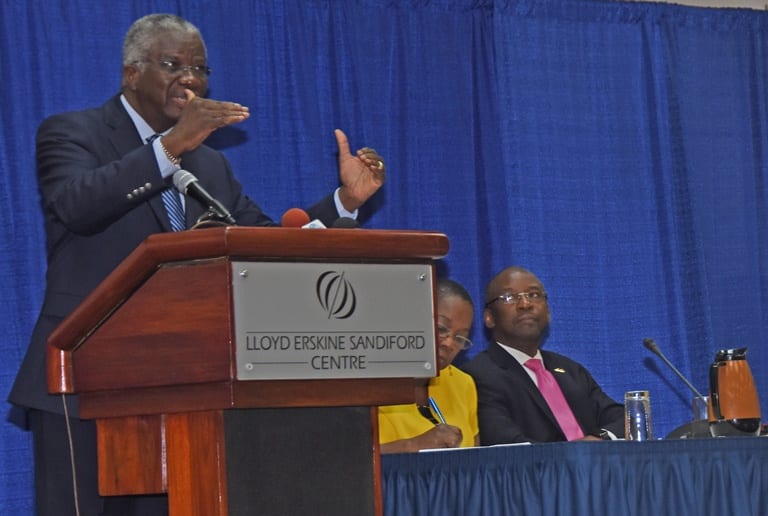 Prime Minister Freundel Stuart has underscored the importance of protecting the society from various threats, while reiterating that Barbados is not just an economy, but a society.

Mr. Stuart made the comments today while delivering the feature address at the National Societal Consultation, themed: Citizen Security: Linking Societal Systems for Success, at the Lloyd Erskine Sandiford Centre.

He said the world had become unstable, with “unprecedented” violence around us. “We see the family put under enormous threat and pressure; our institutions, which were supposed to reinforce our attachment to the building of a society, have been operating under untold pressure as well. The school, church, family, the labour movement, our political parties, all of these reinforcing institutions have been under enormous pressure as a result of a very volatile global environment.

Mr. Stuart told his large audience that if societies were to be protected from threats, officials must determine whether to adopt the mentality of the fox and focus on many things, or that of the hedgehog and zero in on one or two very big issues.

The Prime Minister identified social alienation, frustration, insecurity and disillusionment as the “demons” the western world, including Barbados and the Caribbean, must protect their societies from.

On the issue of alienation, he stated: “There is an increasing number of people, not all young, who do not feel a part of anything that is going on in our society…We have not been communicating with them effectively enough to get them to buy into what it is we are selling…. If you have alienated people who are not feeling a part of the dynamic that is operative around them, then your society is under threat because you cannot count on these people to rise up and defend something of which they do not feel a part.”

He noted that the feeling of insecurity that so many people were experiencing was undermining the coherence that should be holding society together. He expressed the view that too many sacred places and persons had been falling, making persons wonder if they could trust anybody.

The Prime Minister stressed that if social alienation, frustration and insecurity were not confronted, disillusionment would creep in. “If we ever get to the stage where people lose their capacity to dream, to believe that things may be rough now but tomorrow promises to be better, if faith in the future is lost, then chaos will ensue, society will implode…,” he stated.

Today’s consultation was hosted by the Ministry of Culture, Sports and Youth, in collaboration with the Ministry of Social Care, Constituency Empowerment and Community Development.