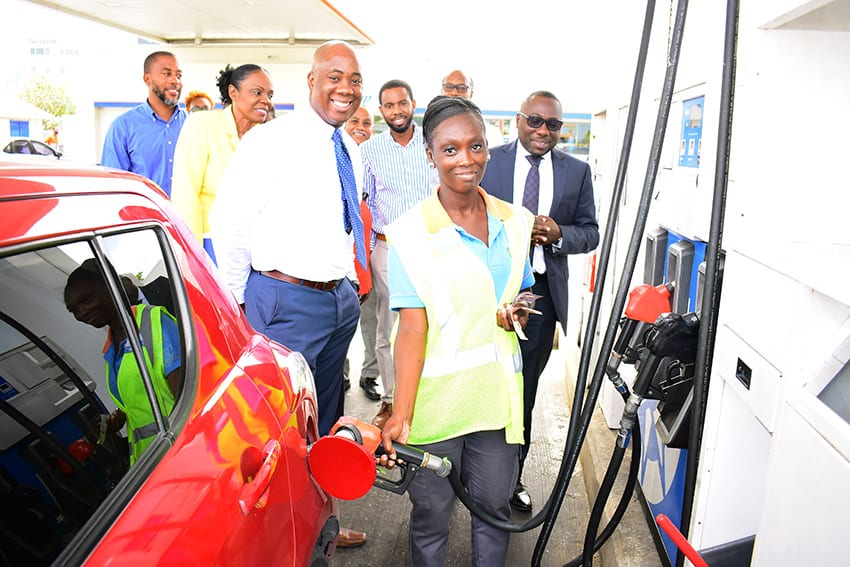 Minister of Small Business, Entrepreneurship and Commerce Dwight Sutherland (right) and ministry officials getting a first-hand look at the operations of Sol Warrens yesterday. He was joined by General Manager of Sol Barbados, Ezra Prescod (fifth from left). (C.Pitt/BGIS)

Minister Sutherland said: “I’m doing tours … to retail sectors; I’ve done the supermarkets and I am now doing the gas station; getting familiar with the operations and seeing how you, as a key stakeholder, are helping to build out this economy.  Gone are the days when we as Ministers sit and behave as paragons of piety and ask people to come to us and try to dictate policy.  We think you have a major role to play in influencing policy and you know, as we seek to upgrade our polity infrastructures, this is indeed critical.”

During the tour, the Commerce Minister was shown how the pumps operated and informed about the methodology for pricing and the level of calibration at the Warrens outlet.

While discussions centred on the National Social Responsibility Levy (NSRL) and the seeming lack of price change since its removal, the two also touched on the issue of incorporating local produce on shelves of convenience stores.

With respect to the NSRL, Mr. Sutherland noted that the Department of Commerce and Consumer Affairs, in doing its work, had realized that freight cost had increased, and said: “The reality too is that there were some goods which did not attract the actual duties that the Ministry would like to see.  We are not saying that there is unfair pricing, but we are asking every single one to share the burden.” 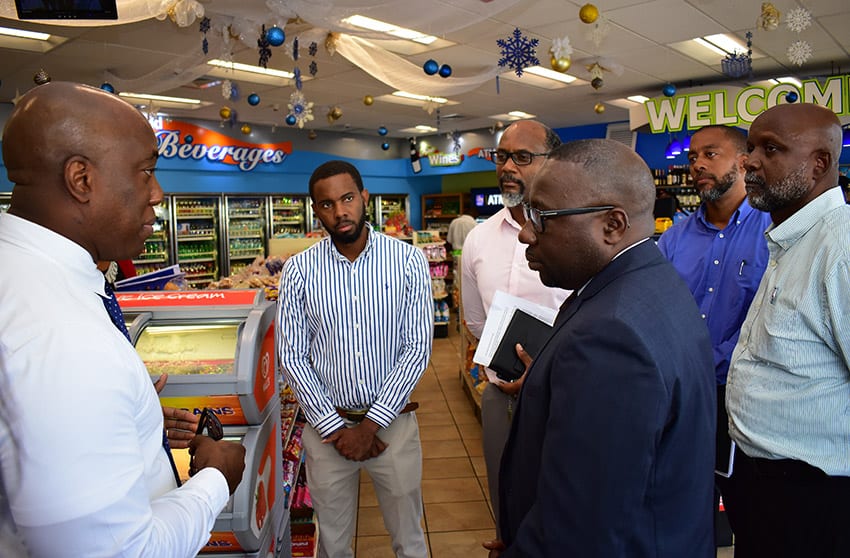 Minister of Small Business, Entrepreneurship and Commerce Dwight Sutherland in discussion with General Manager of Sol Barbados, Ezra Prescod, during a tour of Sol Warrens yesterday. Looking on are members of the touring party. (C.Pitt/BGIS)

Mr. Prescod, in providing Sol’s perspective said: “You removed the NSRL, but there were additional tax measures that went into how you build up a cost.  One of the things that actually increased above everything else, in a survey that I did recently, was the inventory cost of each item…. There are some that have come down, but not everything has come down.  And, then what we have tried to do is add on a margin to that.  We buy it at a price and add on a margin and that margin has not changed with the removal of the NSRL.  So, essentially what we have seen… is your input pricing on some of the items have still remained up in the air, which is an issue.”

Sol was also urged to help Government push the local industry by selling local produce, such as natural juices, in its convenience stores.

Minister Sutherland said: “We have some local juices here and a healthy lifestyle is something we are certainly focusing on.  I know we have some local producers here who are indeed introducing quality produce that cater to a healthy lifestyle. So, that is our push as we seek to build out the retail sector in this country and commerce on the whole.”

The two also discussed issues of product quality and the role of retailers and operators in having an input in the total legislative and regulatory framework.