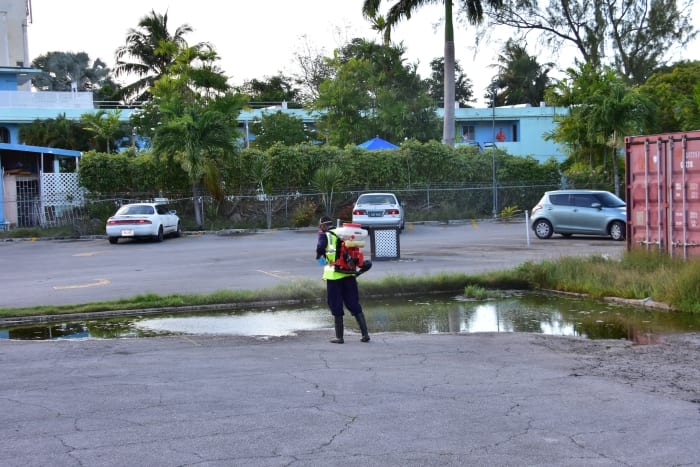 An officer of the Environmental Protection Department fogging an area on the south coast. (C.Pitt/BGIS)

As sections of the south coast continue to experience sewage spills, the Ministry of Health remains vigilant in its surveillance of the affected areas.

According to Ministry officials, along with the current fogging exercises to combat the increase in the Culex mosquito, surveillance of food establishments to ensure proper hygiene practices remains in the forefront.

Environmental health officers attached to the Randal Phillips Polyclinic are going door to door to residences, as well as businesses within the catchment area, sharing information on how public health may be protected.

Recognising the potential for the spread of disease resulting from persons coming into contact with raw sewage, the Ministry has conducted training sessions with restaurant workers in the area and provided guidance on safe food handling practices, including protocols for cleaning and sanitising premises.

Environmental health officers are also on the ground in hotels and restaurants working closely with management and staff to make sure that all measures necessary to prevent persons becoming ill are in place.

Sampling of the potable water supply is conducted on a weekly basis by officers of the Ministry, as well as the Barbados Water Authority (BWA) and the Environmental Protection Department (EPD); while testing and analyses are done at the Best-dos Santos Public Health Laboratory. These tests continue to reveal that the island’s drinking water supply is safe.

The EPD, the agency responsible for testing the near shore water on the beaches, also conducts weekly testing and has deemed the beaches on the south coast safe for recreational use.

Meanwhile, the BWA is continuing work on four injection wells to be used as a temporary measure to divert the effluent. The first well, which is nearing completion, will be used for testing, using potable water in order to assess its performance.

Once the wells are completed and with the installation of a new 10-inch pump due in the island next week, south coast residents can expect some relief to the current challenges.