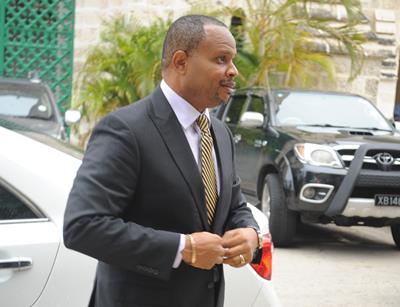 The Special Committee to review the proposed Duty Free Zones will be set up shortly.

This disclosure has come from Minister of Finance and Economic Affairs, Christopher Sinckler, who said some of the employees in his Ministry were working on the Cabinet Paper, which would outline the composition of the committee and its terms of reference.

He added that the paper would be taken to Cabinet for approval. “We expect that would be done in the coming weeks,” he stated.

Mr. Sinckler noted that the Committee would benefit from the technical expertise of some countries that had already implemented a similar initiative.

“Within days of us making the announcement, we have had companies and officials reach out to us from some of those jurisdictions to lend technical advice to us and we are working on that. So, we expect in short order to have that Committee up and running and we will look at the best ways in which we can carry this forward,” he revealed.

Stating that the duty free zones could be successful, he pointed out, however, that there were some areas to be worked through to ensure there was no disruption in the existing systems, or any discrimination or undue advantage of one set of members of the business community over another.

The Minister indicated that selected products would be available in the duty free zone. “You will enter the free zone under certain conditions; you will be able to make those purchases similar to what we do now in the duty free sector in town, but far greater controls are going to be put in place…,” he stressed.

He added that it is hoped that visitors, especially those from the Caribbean, would consider Barbados as a destination they could visit to do cost-effective shopping.

Minister Sinckler announced in last month’s Financial Statement and Budgetary Proposals that the creation of duty free zones would earn and save the country foreign exchange.

He said the Special Committee would review the duty free zones initiative and report its findings and recommendations to him within three months, so a firm proposal could be taken to the Cabinet Committee on Economic Policy for examination and forwarding to the main Cabinet for approval.

He explained that the Committee would comprise the Barbados Tourism Investment Inc., officials of the Ministry of Finance and Economic Affairs, representatives of the Central Bank of Barbados, the Barbados Chamber of Commerce and Industry and the Private Sector Association of Barbados.

The Finance Minister added that the Committee would have the right to co-opt any other person or parties considered necessary in assisting it to carry out its mandate.

Some of the areas identified for duty free zones are Bridgetown, Holetown, Hastings/Worthing and the two main ports of entry. It is hoped that Bridgetown would be ready for this type of business by December.