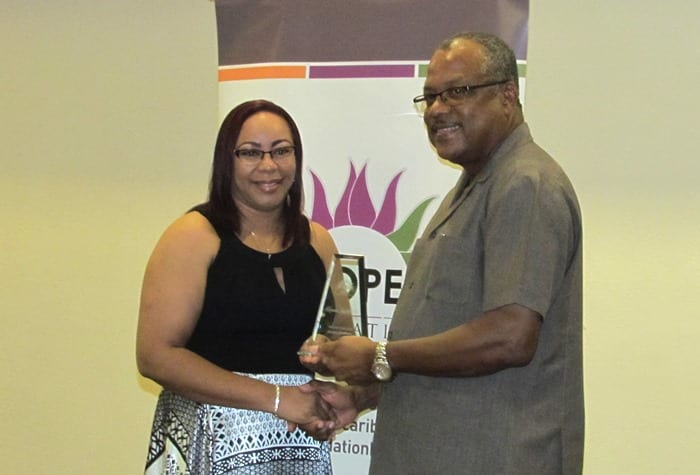 Health Minister, John Boyce presenting registered nurse, Rosanna Lewis, with her award for being at the forefront of early diagnosis and management of patients with lupus. (GP)

In the face of demographic and epidemiological changes, there is a need to focus on developing specific interventions and health indicators to meet new challenges associated with lupus.

This view was expressed by Minister of Health, John Boyce, as he addressed the opening of a two-day Medical Lupus Conference last Friday at Accra Beach Hotel. It was hosted by the Hope Foundation as part of its 25th anniversary celebrations.

Mr. Boyce said lupus, considered the most difficult of all autoimmune diseases, was not easy to diagnose. He explained that it mimicked other conditions and had the propensity to affect any organ system and multiple organs concurrently.

He added that the disease typically affected women, with 9 out of 10 persons diagnosed being females, between the ages of 15 and 44, while they were in their productive and reproductive years.

The Health Minister explained that lupus was three times more common in black women than in Caucasian women. “However, anyone of any age group, any race or either sex, can develop lupus. Particularly in our region, women are very often becoming heads of households and form a large part of the workforce. The significance, therefore, of the disease’s prevalence is that it bears direct correlation with loss of work and productivity. Furthermore, the chances of employment for affected persons are compromised due to their perceived frequent absenteeism,” he pointed out.

The Minister praised the Hope Foundation, saying its contribution through advocacy and guidance, in association with the expertise of the Medical Advisory Board, was exemplary.

“The diverse and successful initiatives of the Hope Foundation have undoubtedly brought new developments to the fore for the benefit of any person diagnosed with lupus in Barbados. It is not only a common forum for patients where any complex issues can be addressed, but also creates awareness and greater understanding of challenges which are not limited to the individual but encompass family, career, employment and social responsibility.

“Barbados is well poised to contribute in a meaningful way and is leading in the region in terms of treatment and support at the patient level. In addition, the mortality rate and coping among patients have improved considerably,” he stated.

Mr. Boyce noted that the Hope Foundation had been in the vanguard of efforts to foster awareness of the lesser known chronic diseases in Barbados, which he identified as including systemic lupus, sickle cell disease and, more recently, arthritis.

During the event, Dr. Stephen King; Dr. Anne Marie Irvine; and registered nurse, Rosanna Lewis, were awarded for being at the forefront of early diagnosis and management of patients with lupus.