Sportspersons To Be Honoured This Saturday 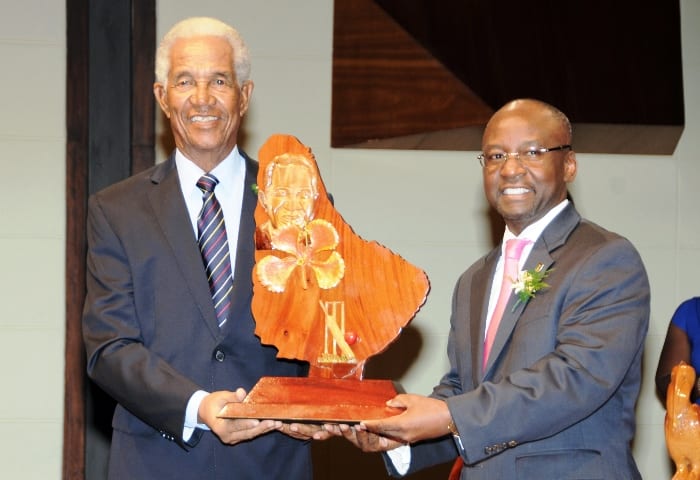 The crème de la crème of this country’s sporting icons will be lauded when a black tie affair entitled: An evening with the Stars, held under the patronage of Barbados cricket legend, The Rt. Excellent Sir Garfield Sobers, takes place at the Hilton Barbados, this Saturday, September 10th.

This was revealed by Minister of Sports, Stephen Lashley, who during a press conference at his Sky Mall, Haggatt Hall office stated that the gala forms part of celebrations to commemorate Barbados’ 50th anniversary.

He said: “…Over the years, we have been able to develop some very iconic sporting personalities in Barbados who are fitting of honour, and the evening is to celebrate them. Many of them will be returning to Barbados. Of course the names of the persons who will be celebrated will be announced on the night of the event …”

Disclosing that also in attendance on the night will be an international sporting icon, Mr. Lashley added this was all part of Government’s vision and policy of ensuring that they use purposeful events particularly the 50th anniversary of Independence to recognise all outstanding Barbadians for their contribution.

“We have over the years been able to distinguish ourselves in many fields of sporting endeavour upon the track, off the track and we will be paying homage to a number of distinguished persons on the evening of the 10th…We also feel that this event will serve to highlight the very distinguished careers of many of our icons.”

The Sports Minister also pointed out that prominent sportspersons will be lauded with the launch of the Barbados Sportsperson’s Trust Fund. He noted that one of the key moments of the night will be the launch of the said Fund, which will have varied uses. He stated that they were in particular focused on using the proceeds from the fund to provide assistance to sportspersons who have since retired.

The Minister maintained that over the years the issue had been a topical one, and had arisen again because several distinguished sporting figures had retired from active participation in sports but nothing had been done to provide for them in retirement.

“This is a start. We are not saying that this is all that can and will be done, but we feel very strongly that we have to start the ball going in making provision, by means of a trust fund that of course all Barbadians can contribute toward providing some sort of support,” he underscored.

The Minister further elaborated that the current situation was not adequate and acknowledged that as the 50th anniversary of Independence approached it was not something to be proud of.

He highlighted countries such as Cuba, and pinpointed North America and Europe as examples of providing for their athletes and indicated that it was time Barbados got on board.