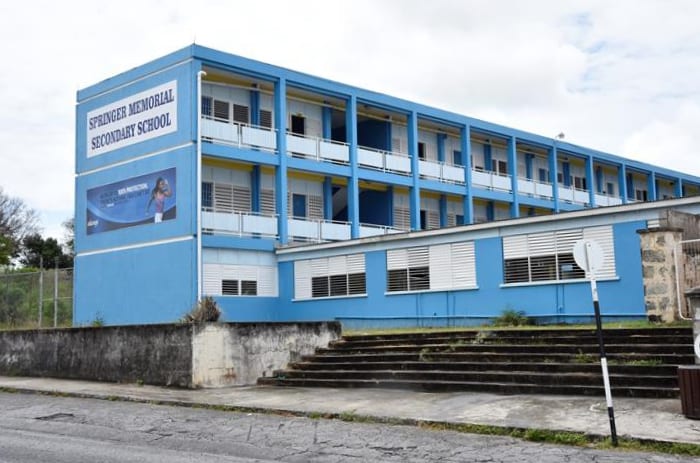 Deputy Principal of the Springer Memorial Secondary School, Mitchelle Maxwell, is pleased with her school’s progress in academics and athletics.

This was made clear when the school unveiled its plans for a plot of land, given to it just over 20 years ago by former Governor General, Sir Clifford Husbands.

During the press launch of the project, called Springer on Track, Mrs. Maxwell said: “We are happy to say as a school we continue to be innovative and creative in the whole process of teaching and learning. These examples are seen in a number of the programmes we have to offer here at the school.”

Adding that students were being offered effective skills in a classroom environment, she remarked that she saw them constantly excelling in their chosen course of study.

A number of students present also spoke of the benefits gained or expected as a result of the Springer on Track project, as well as their current pursuit of Caribbean Vocational Qualifications (CVQs).

Fourth form student, Ashley Jordan, noted she had benefited from the resource room. One who enjoys a special programme that includes lunchtime tutoring and a reduced workload, she said: “The resource room at this school is special to me because it helps me to understand reading and spelling. The skills I learn help me in my physical education goals as I strive to become a professional athlete.

“Without these two programmes, I would probably not be able to fulfil my goals,” the athlete stated. 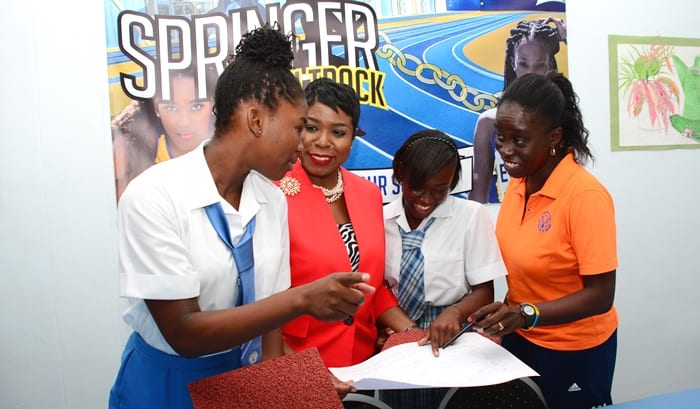 Lesleyann Downer and Atora Clarke, two sixth-form agricultural science students, shared similar sentiments on the value of the CVQ programme at Springer. Atora, who successfully completed the CVQ programme in horticulture, was also the beneficiary of a stint at the Caribbean Permaculture Research Institute, and worked at a local vegetable farm.

Lesleyann said: “We are the only sixth form school that has the agricultural programme in Barbados. We have the largest programme, with classes ranging from fourth to sixth forms, and we will be introducing an upper fifth [agricultural] class in September.

“We are the only all girls’ school that promotes agriculture education. Our school should be given the tools and materials to help pave the road for young women who venture into the professional field of agriculture.”

She also expressed the belief that authorities should invest in agricultural programmes, especially in schools.

Athlete Shonte Seale, who has represented Barbados in netball and volleyball, was thrilled that the physical education (PE) department had secured scholarships over time for students, while Arielle Wood, who is involved in the entrepreneurship course, is hoping to achieve a grade one at Level One CAPE this year.