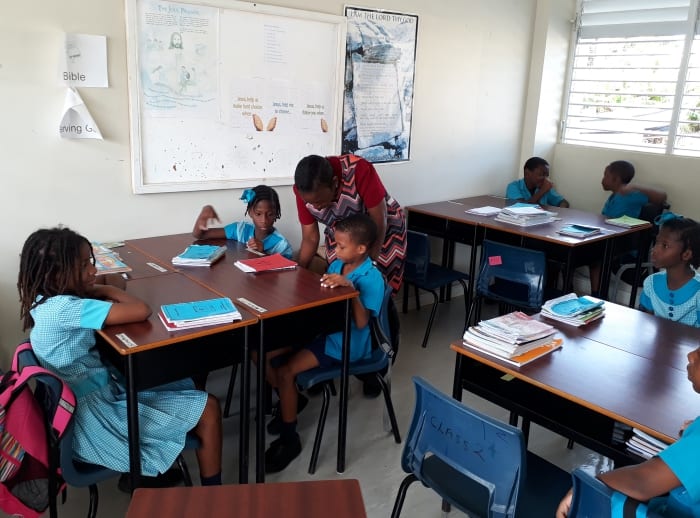 St. Lawrence Primary School pupils and their teacher at their temporary location in the St. Matthias Church Hall in Christ Church. (M.Rollock/BGIS)

The St. Lawrence Primary School in Christ Church will re-open next week at the start of the new school term.

Word of this has come from Chief Education Officer, Karen Best, who said the school, which was temporarily closed on February 26, 2018, due to environmental problems relating to the South Coast Sewerage System, would open its doors to students on Tuesday, April 17.

As a result of the closure, Class Four pupils were relocated to the Arthur Smith Primary School at Pleasant Hall Land, St. Matthias, Christ Church, while the rest of the student body was accommodated at the St. Matthias Church Hall and the St. Lawrence Anglican Church, as a precautionary measure.

Mrs. Best explained that on advice from the Ministry of Health, a berm – an artificial ridge or embankment – was built to prevent effluent from entering the school’s premises, and a manhole to the north of the property had been “secured”. Additionally, she said industrial cleaning of the school was carried out and the perimeter fence is in place to allow for the resumption of classes there.

The Chief Education Officer thanked the principal of the Arthur Smith Primary School and the priests and church councils of St. Matthias Church and the St. Lawrence Anglican Church for willingly accommodating the displaced pupils. She also expressed her gratitude to parents and teachers for their patience during the relocation.