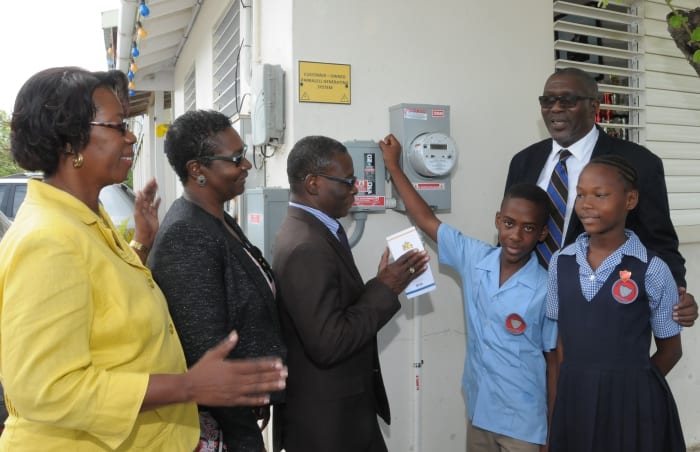 Head Boy and Head Girl of Half Moon Fort Primary, Princess Callender and Keshawn Griffith flip the switch with the assistance of Parliamentary Secretary, Senator Harcourt Husbands while (from left) Principal, Veronica Best; Deputy Permanent Secretary in the Division of Energy, Francine Blackman; and Minister of Housing and Lands, Denis Kellman, look on. (B.Hinds/BGIS)

Half Moon Fort Primary and Selah Primary in St. Lucy are the two most recent primary schools which are trying to bring their energy consumption to zero.

The project, which is headed by the Division of Energy and Telecommunications, seeks to reduce selected schools’ energy consumption from conventional fuels and reduce greenhouse gas emissions through the use of renewable energy.

While giving the feature address at Half Moon Fort Primary, Parliamentary Secretary in the Ministry of Education, Science and Technology, Senator Harcourt Husbands, told the students that “there are very few schools… that have such a photovoltaic system as you have today”, and encouraged them to take pride in their school and continue to “work hard”.