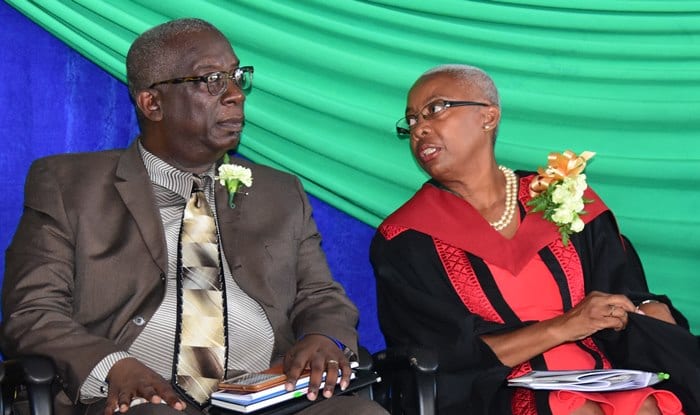 The St. Michael School’s continued excellent performance in academics and other areas is enhancing its demand among parents.

This was emphasised today as its Principal, Dr. Yvette Mayers; and Education Minister, Ronald Jones, addressed students, parents and staff at the annual speech day and prize-giving ceremony at the school at Martindales Road, St. Michael.

Dr. Mayers noted that CXC CSEC results were up this year, moving from 86 per cent last year to 89 per cent passes. Stating that some subjects like Mathematics, English B, Physics, Social Studies and Spanish were slightly down over the last year, she said what was however significant was the French results, which moved from 51 per cent passes in 2015 to 84 per cent in 2016.

The Principal also noted that the school received 100 per cent passes in several subjects, with 96 per cent of those students gaining Grade 1s and 2s. The subjects were: Clothing & Textiles, Electronic Document Preparation and Management, Electronics, Food & Nutrition, Physical Education & Sports, Accounts, Principles of Business, Theatre Arts, Visual Arts and Woodwork. Additionally, she noted that all students as usual gained Grade 1 in Physical Education & Sports.

Commending her staff and the parents, Dr. Mayers said: “Our aim is to improve on Grades 1 and 2 and completely eliminate the other grades.”

This year, Barbados occupied 13th position on CXC CSEC Regional Merit List and, according to Dr. Mayers, four of her students were on the list. They were Jasmine Shepherd, fourth in Clothing and Textiles; Nathan Lovell, third in Music; Abigail Durant, 10th in Music and Amanda Haywood, fifth in Physical Education & Sports.

“We commend these students and wish all of them success in their academic endeavours,” she said, noting the students performed well in sports such as athletics, tennis, squash and badminton, with some being awarded scholarships overseas.

She said: “We will continue to demand a high standard of work from our students…. In 2018, we will be 90 years old, and I challenge those in Lower Six to give us something more to celebrate.”

Mr. Jones, in addressing the gathering, emphasised that yearly the school was in demand by parents and guardians of children taking the 11 Plus due to its quality work and standards

As he complimented the staff and leadership of the school, Mr. Jones described the Principal as very accommodating and understanding of the process of education in Barbados.

And, he added that The St. Michael School was one of those secondary schools which did not present problems with the current issues surrounding School Based Assessments.

“For some reason, the St. Michael School stands out as a beacon of hope in that otherwise murky waters of the students marks going through to CXC.  In other words, I don’t get too many problems at all from St. Michael School and I compliment you for that,” he said.