Staff At The BSTP Elated To Have Lunchroom Again 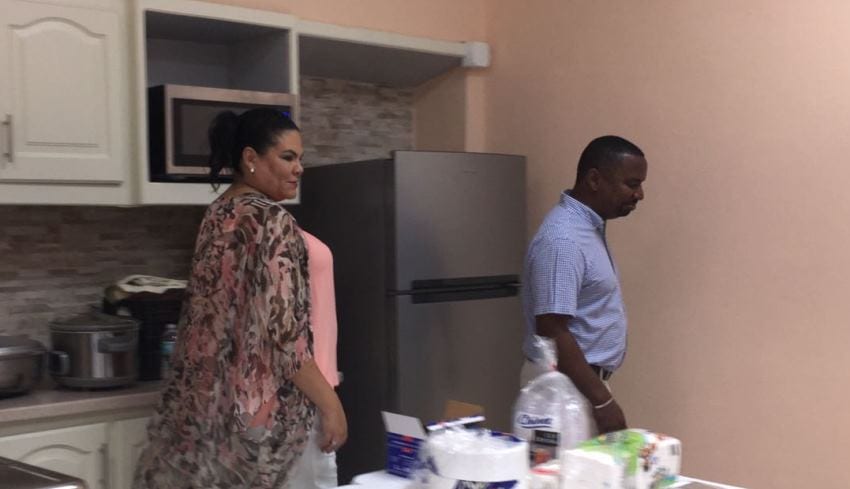 Staff of the Bridgetown Sewerage Treatment Plant (BSTP) are delighted to have a lunchroom, once again.

Last Friday, August 3, staff along with Minister responsible for Barbados Water Authority (BWA), Wilfred Abrahams as well as Chairman of the BWA Leodean Worrell, General Manager, Keithroy Halliday and other officials in the Ministry and BWA; came together to reopen the lunchroom which was destroyed by fire some six years ago.

During his remarks, Minister Abrahams said: “It is not just a lunchroom; it is a symbol, an example of what we can do when we all pull together in the same direction.”

Mr. Abrahams admonished staff to never feel that anything was too small to mention to him, because if it was important to staff it was important to him.  He remarked: “I have a simple approach, whether it be my life, my practice, politics or my Ministry, in that if something is not good enough for my family, it is not good enough for staff and I treat everybody the way I expect my family to be treated and therefore I can’t ask you to accept something I would not.”

In his remarks to staff of the BSTP, the Minister stated that he knew how important it was for people who work together to feel like a family; noting that quite often it was in such places of work where people limed on afternoons, had a drink on Friday and played cricket or dominoes together, that saw the most productive work.  This, he said, was because persons at these places were like family and looked out for one another. He was therefore happy that staff could once again have such a place.

Chairman of the BWA Board, Leodean Worrell, in addressing staff, expressed her pride at the work completed and the short time in which it was done.  She commented: “The statement to be made from this is even more powerful than just a kitchen; it shows that we have resources in house that have been overlooked, it shows that there are opportunities in house that we may have forgotten … and we will always use this kitchen as an example, as a benchmark, as a reminder of what we can do when we work together towards one common goal.”

Henry Codrington, a staff member of the BSTP, stated that the lunchroom was more than just a lunchroom to the staff. It was a room where they celebrated birthdays, weddings and also mourned the loss of staff and their family members.

He pointed out that all work was done in-house, by the Capital Works Department and it was designed by acting senior engineer, Shenelle Bayley.