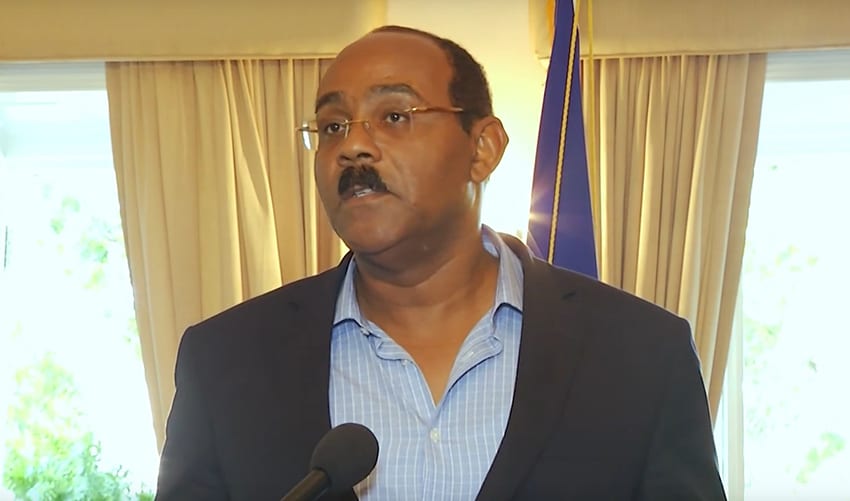 Chairman of the Sixth Meeting of COFAP, Prime Minister Gaston Browne of Antigua and Barbuda speaking at Ilaro Court on Wednesday, September 5. (F.Ince/BGIS)

First of all, let me thank the distinguished Prime Minister of Barbados, the Honourable Mia Mottley for the energy that she has brought to the CSME. In fact, in Montego Bay, a couple months ago, she actually pledged to assist in reinvigorating the organs of CARICOM  as well as the CSME itself.

And I have to tell you that she has been a toward of strength in the integration movement and in a sense would have played a significant role in ensuring the functionalities of these organs and at the same time to ensure that there is increased focus on the CSME.

And certainly, our chairman as well, the Hon. Andrew Holness would have played his part as well. In fact, it was Andrew who identified the CSME as a critical area to ensure that we have a truly functioning Community and to move towards the eventual establishment of a Single Economy.

Now the COFAP met yesterday, and it would have been twice within the last sixty days [that it met] after not meeting for at least five years, so it shows very clearly that there is a renewed commitment within CARICOM to make sure that CARICOM functions especially for the benefit of the ordinary man and woman living within the respective Member States.

Just to address a few issues that were addressed by the CAOFAP yesterday. We discussed the region for a deposit insurance system which will establish a level of protection for depositors against losses due to [the] failure of financial institutions. And the conference urged the urgent implementation by the Council for Finance and Planning for the Caribbean Community, (CARICOM).

And this is especially important considering the failures of BICO, CLICO and other financial institutions within the region. Even in the case of Antigua and Barbuda, we had perhaps one of the most spectacular bank failures, in which we had the ABI Financial group that went belly up. My government had to issue a deposit protection fund in the region of $250 million representing almost 10 per cent of our GDP.

So, having this type of protection is absolutely important. This is one of the measures which the Council agreed should be pursued within the financial corporation initiatives to enhance the financial safety net for depositors and even for investors in the CARICOM Single Market and Economy, the CSME. We also took follow up action on the mandate from the CARICOM Heads of Government calling for the finalization of some of the relevant instruments of the Inter-sessional meeting in February of 2019, and others by next July.

These include the Community Investment Policy; an investment code; an incentives régime; and an integrated capital market; starting with the adoption of model securities market legislation. And I know Prime Minister Mottley was very excited about this and no one will in the future accuse her of poaching any investment in any other country.

Now, we also agreed that the finalization of the CARICOM Financial Services Agreement should be expedited. These actions will strengthen the regional financial stability mechanisms. The ministers also approved in principle the objectives of the CARICOM Credit Reporting policy- which, among other things, provides for the regulation of the operations of credit bureaux and cross-border exchange of credit information within the Community. Now this is a very important initiative, that will promote financial inclusion for CARICOM nationals, as they live and work across the Community.

And evidently, it will facilitate greater accessibility to credit and at the same time show that there is more borrowing to support increased economic growth and development and to create opportunities for our people. In fact, it will also help to encourage greater entrepreneurship across the CARICOM space. So having this credit reporting policy and settling a bureau in which we can exchange information freely in order to facilitate the free flow of credit within the region is absolutely important to the business of development and certainly for growth and development.

As concerns continue with respect to the continuing issues of some Member States being labelled as non-cooperative tax jurisdictions, the Council urged a more collaborative approach within the European authorities and other relevant international bodies. This area remains an existential threat to the region and we are seeking to dialogue with various bodies within the EU and individuals within the EU obviously at the top political level so that they can understand the consequences of their actions.

I mean the unilateral decisions that they would have taken that are now impacting on the region, especially in the context of the proposed sanctions and the blacklisting. So this is an issue that we are monitoring very closely. We will work collectively [on this].  In fact, we’re hoping that there’ll be certain interventions made within the next 30 days that hopefully will bring some relief to the various countries in the region to avert any potential blacklisting or, for that matter, any curtailment of technical support or Grant aid from the European Union.