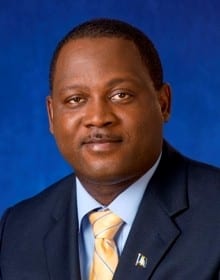 “Leave and go where?”

That is the question Industry Minister, Donville Inniss is asking regional leaders and those looking to exit CARICOM.

Speaking over the weekend at the Caribbean Association of Administrative Professionals (CAAP), Council Meeting and Convention at the Barbados Water Authority’s Headquarters, Mr. Inniss chided those at the political level for expressing such a view and stated that there needed to be a stronger bond across the region.

“Already you are hearing those individuals who are talking about leaving CARICOM…are you going to go and join Latin America and South America? They don’t want you. Are you going to join your wagon onto Donald Trump? He doesn’t want you. We really and truly need to stop panicking in this region, we need to stay focussed, as there are opportunities that come when we work together as region,” he underscored.

Acknowledging that over the years he has been very critical of CARICOM due to its structure and administration, the Minister clarified however, that he did not deem the regional body a failure.

“I am a firm believer in CARICOM, I believe it can work and your organisation the CAAP is perhaps an example of the one entity in the region that CARICOM can certainly learn from. Certain politicians need to stop panicking and behaving as though it is the end of the world, and making threats about leaving CARICOM.

Nobody wants you, you need to stay in the region… the bottom line about it in the grand scheme of things [is that] we are a little dot in the ocean. And, we need to stop this thing as politicians making veiled threats and start really and truly to find ways to work together,” the Minister reiterated.

In commending members of the Association for its work, Mr. Inniss pointed to their common history and shared destiny, and outlined that there was much more which united them than divided them. In concluding, the Minister told attendees that the work of administrative professionals was not easy and was often complex, demanding and made difficult by the continuing global challenges and changes.

“…ladies and gentlemen, the Caribbean is at a crucial stage in its development, global processes have resulted in the region losing its competitiveness and there is also the risk of losing the development gains made over the years. We have an opportunity now, you and I, and many of us to stop that cycle. You have the opportunity now to make a positive difference at your work, your community and your region. Do not waste time. I say to you, do not sell yourself short…,” he charged.