Stuart: Barbados Has Made Great Strides 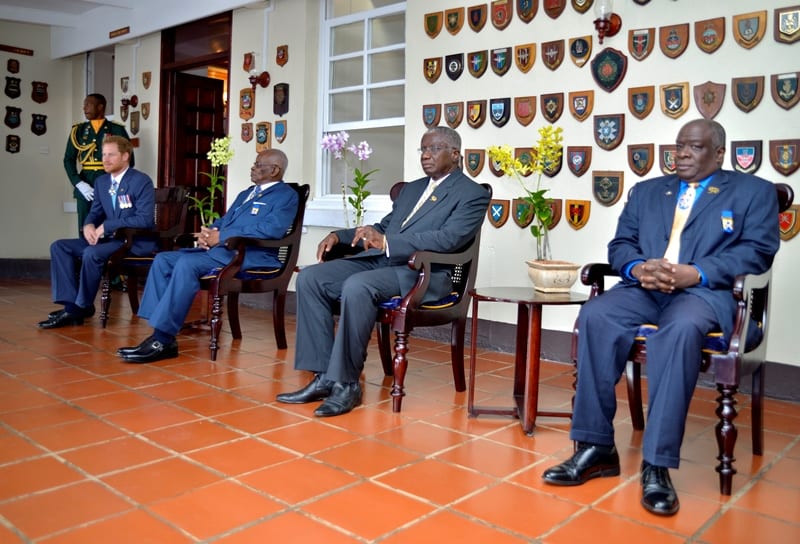 From left to right: His Royal Highness Prince Henry of Wales; Governor General Sir Elliott Belgrave; Prime Minister Freundel Stuart; and Chief Justice, Sir Marston Gibson, at the Toast to the Nation at the Officers’ Mess of the Barbados Defence Force (BDF). Photography: A. Cumberbatch/BGIS

Barbados has justified its decision in 1966 to seek independence. This view was shared on Wednesday by Prime Minister Freundel Stuart, as he addressed a host of distinguished guests at the Toast to the Nation at St. Ann’s Fort.

Among those in attendance were His Royal Highness Prince Henry of Wales; Governor General Sir Elliott Belgrave; President of Guyana, David Granger and his wife Sandra; this year’s Independence honourees; members of Cabinet and the Diplomatic Corps; Barbadian superstar, Rihanna; and Barbados’ only living National Hero, the Right Excellent Sir Garfield Sobers.

In his address, Mr. Stuart said that over the last 50 years, Barbados had made “significant strides” as a nation state.

“At the political level, we have been able to maintain an enviable stability here in this country, at all times ensuring that the rule of law prevailed; that we maintain the independence of the Judiciary, and that we change Governments without too much fuss, fanfare or event,” he stated.

This, he observed, was no small feat, as world events showed the difficulties experienced by other nations in registering similar successes.

The Prime Minister also noted that at the economic level, Barbados’ economy had been developed and diversified from a focus on sugar to one led by tourism, and in which international business and financial services were playing a significant role.

“In addition to that, we are in the process of developing new industries, particularly the renewable energy and cultural industries sectors.  And socially, Barbados is today a more inclusive society than at any other time in its history,” he pointed out.

During the event, Prince Henry delivered a message on behalf of his grandmother and Barbados’ Head of State, Queen Elizabeth II, in which she congratulated the island on reaching its golden jubilee.

“Since you became an independent country in 1966, you have continued to flourish and grow into a strong and confident nation. The extraordinary talents of your people, from the cricket field to the music industry, have been admired and recognised throughout the world,’’ the message stated.

Her Majesty also noted that Barbados remained a favourite holiday destination for British people, not only for its natural beauty, but because of its citizens’ “warmth and generosity of spirit”.

She added that Barbados and Britain had “a shared history, similar values, and an affection that continued to bind us in friendship”.

Tags: 50th anniversary of Independence, Toast to the Nation