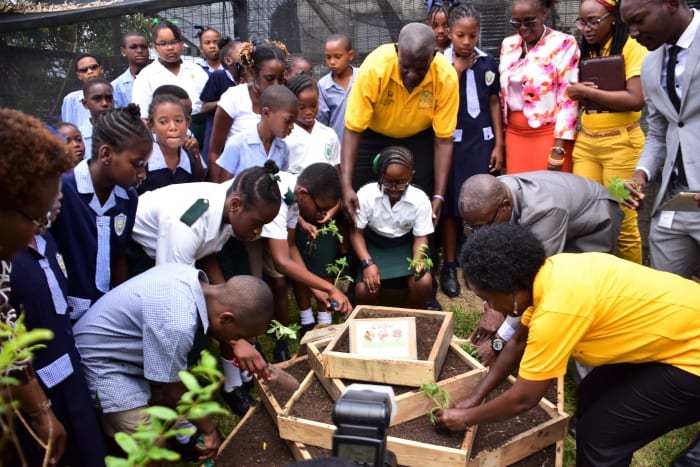 Students of the Ellerton Primary School being assisted in the planting of tomatoes by Minister of Housing and Lands, Denis Kellman, (second right, bending over) and RDC Deputy Director, Annette Clarke (right). (C.Pitt/BGIS)

The involvement of children in agriculture, and particularly the Rural Development Commission’s (RDC) Grow What You Eat programme, has the potential to change the economic situation on the island.

This was emphasised recently by Minister of Housing, Lands and Rural Development, Denis Kellman, as he toured Ellerton Primary, in St. George, one of six schools in a related pilot project under the RDC’s Grow What You Eat initiative.

The pilot is being implemented with the assistance of the United Nations Development Programme (UNDP), through its Regional Entrepreneurship and Agricultural Program (REAP), in partnership with Youth Equipped to Achieve (YEA), the Sustainable Barbados Recycling Centre (SBRC) and the Barbados Port Inc.

The tour followed the RDC’s signing of an agreement with the UNDP and the Youth Development Programme to push the interest of students in agriculture, both at the primary and secondary levels, and help them see the entrepreneurial prospects.

While reiterating his support for the Grow What You Eat initiative, Mr. Kellman said: “Once we continue, it can change the economic fortunes of Barbados…. Whenever you grow from the bottom up, the multiplier effect is much greater and the impact on the economy is much better. If we can get everybody involved in micro-farming, then it means that the growth of the country will be much better.

“If we start with the students and educate them well, then they would know that there is no crime in agriculture because the ‘man in agriculture’, everyone has to depend on him. You can’t do without food… If we have revenue and no foreign exchange, we have no country.”

He thanked the UNDP for their educational role in the pilot project; Barbados Port Authority Inc. for assisting with the pallets; and recycling company, SBRC, for controlling the waste. The latter was further urged to help the children learn how to utilise waste as fertilisers for growing crops.

Students heard that once the initiative was ingrained in their minds, they could also educate their peers and parents. The health benefits to be gained were also highlighted, with Mr. Kellman reminding them that when centenarians were visited by the Governor General they often remarked their diet was never foreign food but consisted of local ground provisions.

“It is not only agriculture for the sake of reducing the food bill and also the economic solutions but we have to recognise that there are also health solutions,” he said. 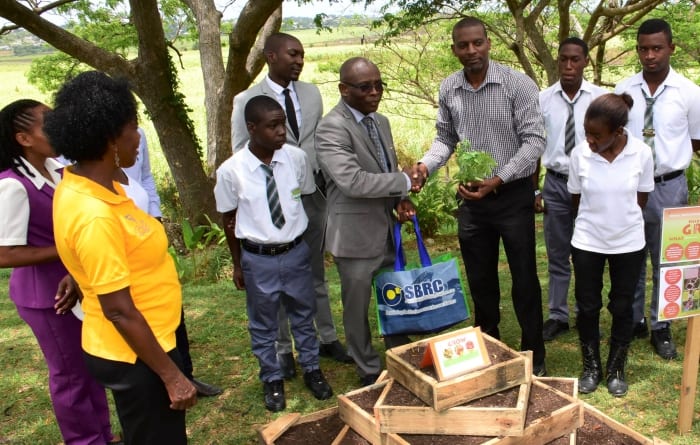 Minister of Housing and Lands, Denis Kellman, hands over seedlings to Deputy Principal of the St. George Secondary School, Stephen Proverbs, while students and officials look on. (C.Pitt/BGIS)

Meanwhile, National Coordinator of the Global Environment Facility (GEF) Small Grants Programme – UNDP, David Bynoe, revealed that his organisation had, over the last four to five years, committed over US $200,000 towards agricultural initiatives in schools.

Pointing out that this fell under the Regional Entrepreneurship Agricultural Programme, he said it aligned “very well” with what the RDC was doing and this was why they were such integral partners. He further acknowledged that the Grow What You Eat programme was in keeping with the famed words of the late Carmeta Fraser, that “Food Comes First”.

Mr. Bynoe also noted the UNDP’s thrust to ensure sustainability was built into the Grow What You Eat programme at the schools and said: “We would ensure that this programme has a strong environmental component so the environment is being protected. So what they are doing here is really a form of organic production, where a lot of these synthetic and harmful pesticide and fertilisers are excluded so we can have healthy food… What it embraces is also the social component, where young people learn to sell and market their produce…

“In addition to that, we also have the economic component and many of these initiatives, replicated now across 43 schools in Barbados, would have shown that they can mobilise resources on their own; they can help to generate resources that can keep their project going and that is extremely important.”

Five other pilot schools were visited by the RDC and its partners. There were St. George Secondary, Deighton Griffith Secondary, St. Bartholomew’s Primary, Gordon Greenidge Primary and Frederick Smith Secondary.