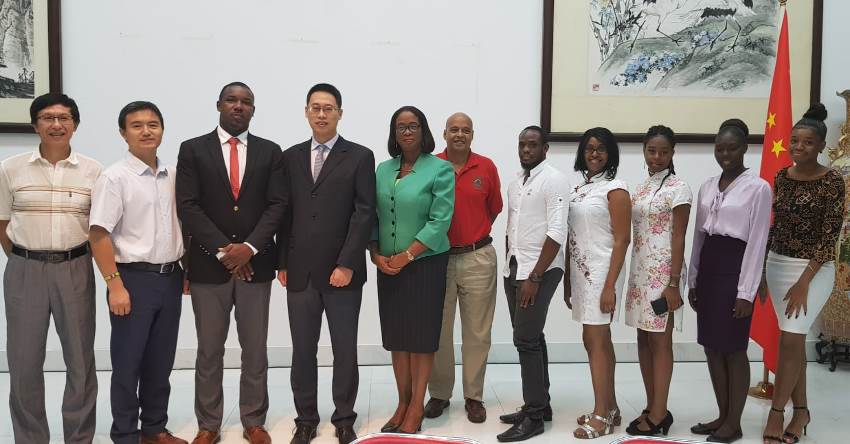 Five students from the Confucius Institute of the University of the West Indies (UWI) Cave Hill Campus were awarded for their outstanding performance in learning the Chinese Mandarin language.

Phillip Prescott, Alicia Harewood, Aliah-Rose Taitt, Asha John and Destinee Alexander were presented with the 2018 Chinese Ambassador’s Award during a recent ceremony at the Embassy of the People’s Republic of China.

Minister in the Ministry of Foreign Trade, Sandra Husbands congratulated the awardees, and encouraged them to be a bridge between the two cultures. She pointed out that learning a new language could bring about exposure to new opportunities in business and personal growth, and a deeper cross-cultural understanding.

She added that Prime Minister Mia Amor Mottley has repeatedly expressed a desire for Barbadians to be bilingual. Noting that Mandarin was one of the preferred languages, she commended the students for taking a step in that direction.

According to the Chargé d’affaires, Zou Xi, the award was established to support “well-performing” mandarin students, and to deepen the educational cooperation between Barbados and China. Based on feedback from the awardees, those objectives are being met.

Phillip Prescott, the lone male awardee, was extremely pleased with his accomplishments. Not only did he achieve his goal of being able to speak Chinese fluently, but he visited China and gained an appreciation for that country’s culture.

“When I first started learning Chinese, I spent hours every day reading, listening and practising over and over until I was able to perfect or come close to what I thought was perfection of pronunciation.

“I was lucky enough to visit China and participate in the fifth annual Chinese summer camp. During this period, I studied the Chinese language, tea making, martial arts and other courses. I tried to make sachets, draw fans, do embroidery and did jade carving. I also got the chance to visit the Great Wall of China,” he recalled. 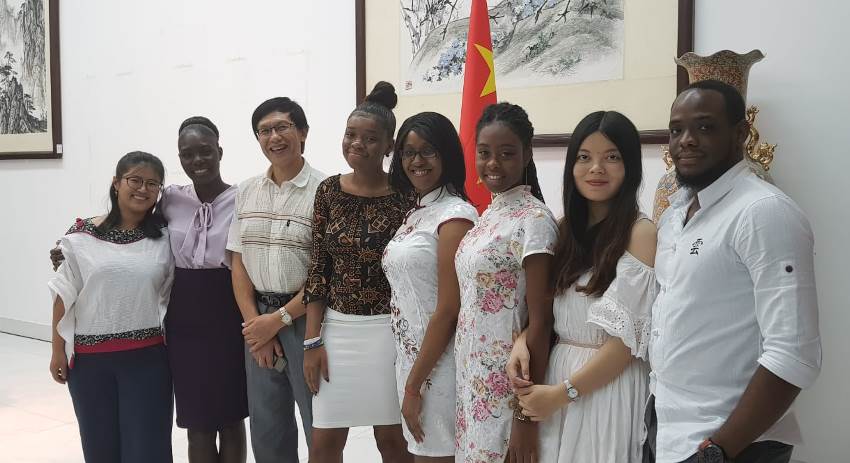 Students from the Confucius Institute of the University of the West Indies (UWI) Cave Hill Campus who were awarded for their outstanding performance in learning the Chinese Mandarin language, with their teachers. (S. Pile/BGIS)

Alicia Harewood said she was introduced to the Asian language when she began her studies at UWI, Cave Hill. She entered a competition called the Chinese Bridge Experience, which was open to students of the Confucius Institute. Through that initiative, she sharpened her Chinese and attended the summer camp.

While there, she visited the Great Wall of China, learnt to perform traditional dances, developed strong friendships and gained a greater love for Chinese culture. So inspiring was the experience that Alicia vowed to continue studying Chinese. She hopes to one day teach English in China, or to work in the science and technology field in that country.

Awardee Destinee Alexander opted to study Chinese instead of the “usual” French and Spanish. “It was really fun to learn,” she said, adding that she hoped to incorporate the language into her future career. She also praised her teachers and fondly recalled her Chinese nickname, which means tall, slim girl.

Aliah-Rose Taitt also developed a special bond with her Chinese teachers. She praised them for making the course enjoyable, stating she has grown to love the language. She, too, participated in the Chinese summer camp and said she was happy to have the opportunity to learn the language. She hopes to continue her
studies in China.

Asha John said she began studying Chinese in her first semester at the university and was pleased to score an ‘A’ in her final exams. The aspiring psychologist is considering pursuing a Minor in the language, and hopes to eventually become a consultant in China.