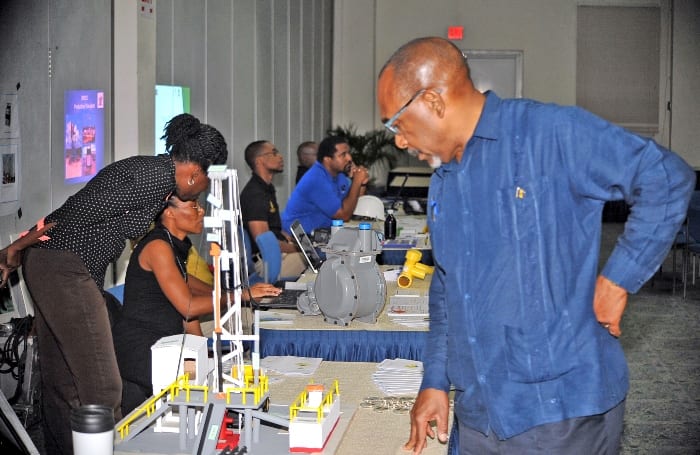 Minister with responsibility for Energy and Telecommunications, Senator Darcy Boyce, looking at one of the exhibits at today’s Youth Energy Forum hosted by the Division of Energy. (A.Miller/BGIS)

Minister with responsibility for Energy and Telecommunications, Senator Darcy Boyce, has told secondary school students that they are the ones who will move Barbados forward over the next 50 years.

Speaking today at a youth energy forum, hosted by the Division of Energy to celebrate Energy Month, Senator Boyce told his audience: “Whatever we do in technology in Barbados in the next 50 years, you have to do it. You have to conceive it; you have to lead it.”

It was therefore important, he said, that they begin to make their inputs into the process, and the forum provided an excellent opportunity for them to start sharing their ideas.

A key issue for their consideration, he said, was how Barbados could become independent of the rest of the world in terms of energy.

He told them that Barbados was committed to reducing its energy use by 22 per cent by 2029, and one way to help achieve this was to convert from incandescent lighting to LED lights.

Mr. Boyce submitted that to successfully do this would require a strong communications package, and this was one area in which the youth could be co-opted because they had a greater appreciation of technology and knew many more ways of reaching people to get the message out than the older generation.

He also advised the students to explore all the career opportunities which were opening up in the field of technology, particularly in relation to energy and telecommunications.

He noted that one obstacle was the cost, and suggested that young people interested in a career in this area would be challenged to come up with new designs, which could lower costs.

Minister Boyce told the students he looked forward to receiving their report, and also hoped that a similar forum would be held in the future to canvass their ideas on telecommunications.