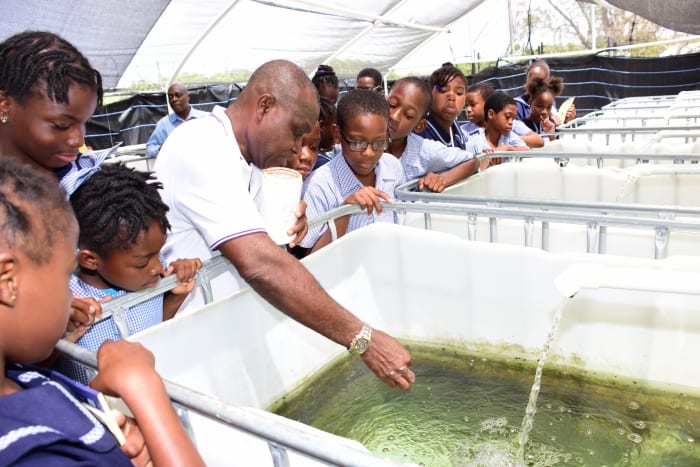 More than a dozen students of St Philip Primary School got a first-hand look today at how certain species of fish can aid health officials in the fight against mosquito-borne diseases.

Mr. Gaskin explained that the students were already exposed to the theory of mosquito and rodent control and solid waste management as participants in the St. Philip’s Schools’ Competition two years ago. He added that the tour was designed to allow the school children to see the different species of fish that eat mosquito larvae.

The health official credited his colleague Mr. Mascoll for developing the excellent fish farming facility at Graeme Hall. Pointing out that not all species of fish ate mosquito larvae, the Principal Environmental Health Officer said the consumption patterns of different species of fish would be examined at the facility to determine which ones were the main consumers of mosquito larvae.

He told the students they should bathe their dogs at least once a month; ensure that the animals’ coats were well groomed and to remind their parents to license all dogs and take them to the vet for a regular check-up.

Mr. Benjamin reminded the children that caring for their pets was a tremendous responsibility and he encouraged them to wear protective footwear when they played or fed the dog in its kennel.

The children also showed off their knowledge about mosquito larvae and dog grooming, much to the delight of Class Teacher, Sandra Williams; and IT Coordinator and Music Teacher, Kwame Edwards.