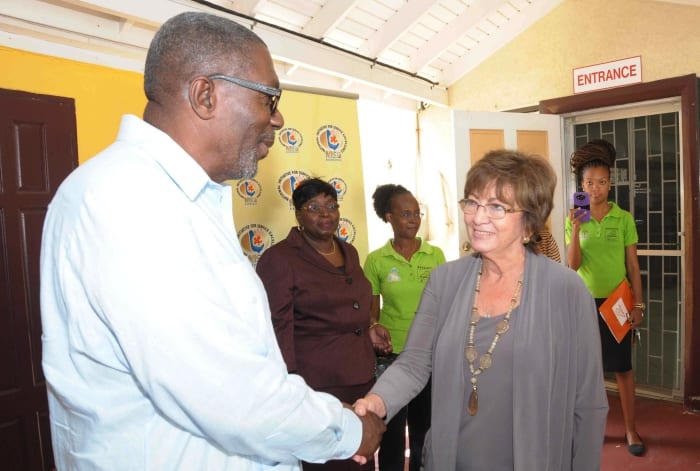 Students pursuing programmes under the A Ganar Skills for the Future programme have been told to see the programme and the resources allocated as a gift to be used wisely.

Parliamentary Secretary in the Ministry of Education, Science, Technology and Innovation, Senator Harcourt Husbands, made this assertion today while addressing a brief ceremony to update officials on the progress with the programme at the Barbados Vocational Training Board’s (BVTB) All Saints, St. Peter, training facility.

Senator Husbands, who was speaking to a group of students undertaking training in the BVTB’s Bar and Restaurant Services programme, said if they put the opportunity to good use, the rewards would be returned “times over the monetary contribution made”.

“You are being offered a tremendous opportunity to develop a skill that is valuable in Barbados, the region and any place in the world.  The skills that you are learning here are valuable internationally.

So, whenever a job is available, you are beginning to acquire the skill to do that job. A few years down the road when you have fulfilled that dream, think back to this moment and the contribution,” he underlined.

He thanked officials from the Inter-American Development Bank and the United States Government, via the US Embassy and USAID, for the resources that they had placed at the disposal of Government for the work in “this tremendous programme”.

Senator Husbands also heaped accolades on A Ganar and the Skills for the Future Programme for the tremendous work being done in schools.  “Those who are involved in A Ganar, we cannot pay them the true value that they are adding to this country.  Many of them could be employed elsewhere but they are [giving their time] for Barbados,” he stated.

A Ganar is an innovative programme which is Spanish for “to win” or “to earn”. It was created 10 years ago out of an idea from Brazilian soccer player, Pele, and former Inter-American Development Bank President, Enrique Iglesias, to use soccer as a vehicle to channel the energy and passion of youth to help them develop life skills and find a way to maximise their full potential and to become productive citizens.