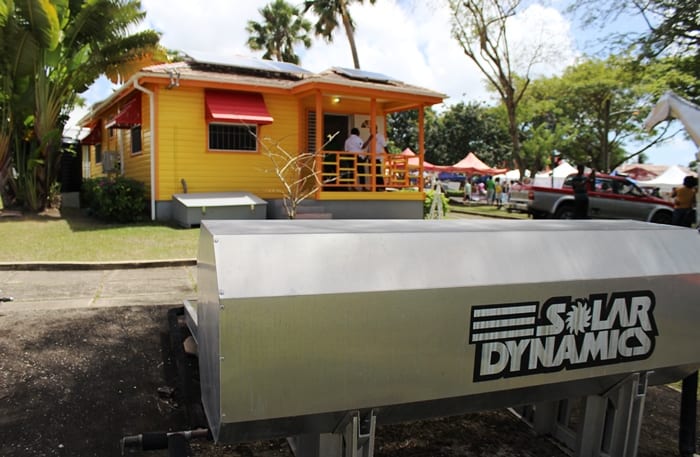 A study will be commissioned shortly to analyse the state of the Solar Water Heating Sector, in an effort to determine what further assistance Government can provide to increase the penetration rate.

Prime Minister Freundel Stuart made the disclosure today while delivering the feature address at the Sustainable Energy Independence in the Caribbean: Making It Happen Conference, at the Lloyd Erskine Sandiford Centre.

Mr. Stuart said the success of the sector had shown what local entrepreneurial spirit, generous fiscal concessions and the support of the community could achieve to make the island a model in the world.

However, he expressed the view that there was a need to increase the penetration rate of the systems in the island, especially in the lower income sector.

He said Government had undertaken a number of initiatives in its quest to make Barbados a 100 per cent renewable energy island within the next 50 years, and it currently has many projects in the pipeline.

The Prime Minister disclosed that by the end of 2017, Government would have started to retrofit the 25,000 streetlights in the island with LED lights; and an additional 50 public buildings would be outfitted with solar photovoltaic systems.

He added that a study would have been completed on the potential of the island for ocean energy, particularly ocean thermal energy conversion; and work would have started on the first wind energy utility scale plant in Barbados.

Mr. Stuart added that some of the tangible results were the distribution of approximately 45,000 free LED lights to householders; and another 12,000 would be issued within the next two months.

He noted that public buildings, including the Queen Elizabeth Hospital, schools, polyclinics and fire stations, had been retrofitted with 25,000 LED lights.

“Rebates have been provided for over 3,000 residences for energy efficient appliances under the Energy Smart Fund, and the Government has provided in excess of $12 million in low interest loans to businesses for the erection of solar photovoltaic systems…,” he pointed out.

The two-day workshop is sponsored by the Barbados Renewable Energy Association and the Central Bank of Barbados.