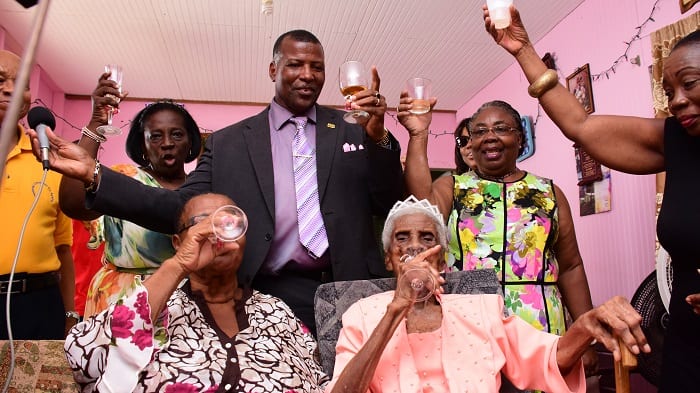 Barbados has recorded its third super-centenarian.

She is Millicent Yearwood of Fitts Village, St. James, who celebrated her 110th birthday today.

Surrounded by immediate family and close friends, Ms. Yearwood was presented with a token of appreciation for reaching this milestone by Chairman of the National Committee on Ageing, Sylvester Niles.

He shared with those gathered that the super-centenarian’s name and details would be forwarded to the Gerontology Research Group, a global group of researchers at the University of California in Los Angeles, United States, who verify and track super-centenarians.

Ms. Yearwood’s daughter and only child, Mavis Small-Raper, stated she was “very glad” that God allowed her mother to see her birthday, and said the elderly woman was looking forward to it.

Mrs. Small-Raper noted that her mother, who had very good eyesight but some difficulty hearing, was very independent, and still fed, bathed and dressed herself. She recounted that the supercentenarian spent most of her time sleeping during the day, and at night was often heard singing hymns with her family.

She added that apart from Ms. Yearwood’s impaired hearing, she was “generally in very good health”.