Supreme Court To Be Temporarily Relocated 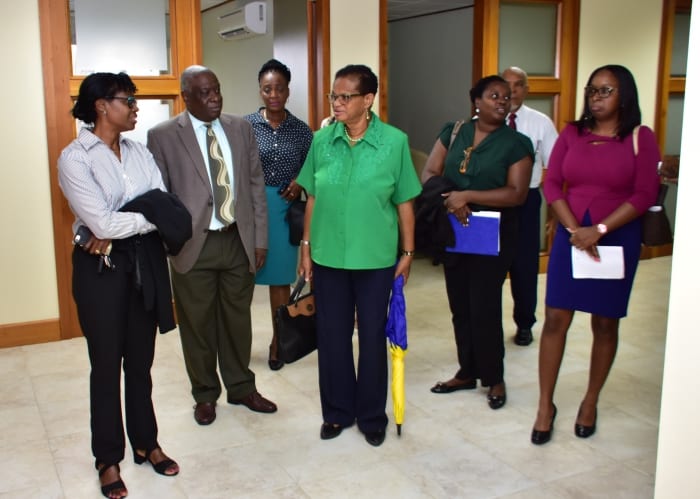 Registrar of the Supreme Court, Barbara Cooke-Alleyne, QC, (left) Chief Justice Sir Marston Gibson and General Secretary of the National Union of Public Workers, Roslyn Smith, engage in conversation as other officials look on during the site visit. (C.Pitt/BGIS)

As a result, the Court of Appeal and High Courts will be closed from Monday, May 28, to allow staff to begin the moving process.

Meanwhile, the Records Department will remain open to the public until Wednesday, June 6, during which time persons will be able to register babies, as well as apply for death and marriage certificates. However, only urgent applications will be accepted by the Court of Appeal and High Courts for filing.

These changes are to allow for a general cleaning of the Supreme Court Complex at White Park Road, St. Michael, following a number of environmental concerns raised by staff.

The move was confirmed by Registrar of the Supreme Court, Barbara Cooke-Alleyne, following a site visit at the new location on Wednesday.

Mrs. Cooke-Alleyne explained that the Civil Courts, Registration and Records Departments, Accounts, Marshals and ancillary staff would be relocated to the Manor Lodge Complex, while the Criminal Court of Appeal and the Criminal Courts would be moved to the new District “D” and “F” Magistrates’ Courts at Cane Garden, St. Thomas.

“It is estimated that we should be operational by June 18, and we are to be here [at Manor Lodge] for four months before we go back to our base,” Mrs. Cooke-Alleyne stated, noting that court rooms were presently being constructed at the temporary location.

Following a tour of the proposed new quarters, Mrs. Weekes said that she was heartened that something was being done to resume the effective functioning of the court system. “Once we have a fixed place we can have courts running, sitting, and scheduling appointments so that matters can be heard and disposed of. We are quite pleased with that,” she stated.

Similar sentiments were echoed by Mr. McDowall, who noted that the suggested accommodation for court staff was “more than satisfactory”. He added that the union was pleased with the efforts being made at this point.