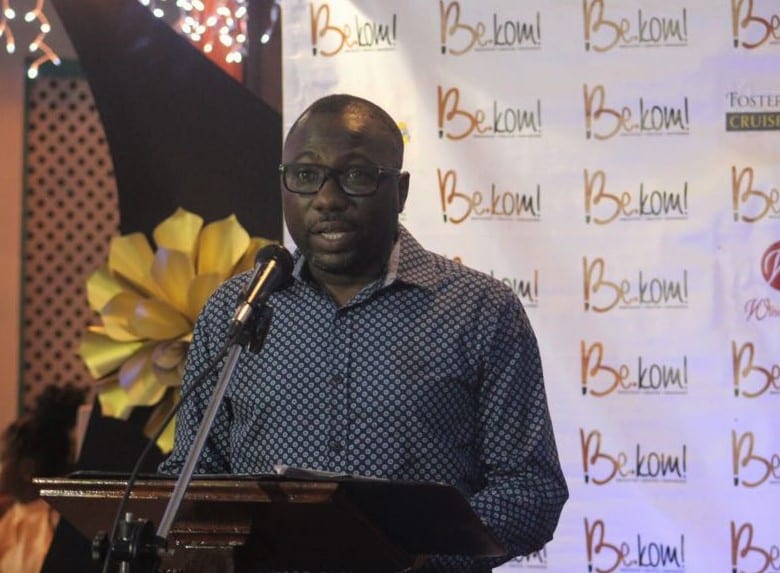 Minister of Small Business, Entrepreneurship and Commerce, Dwight Sutherland, as he addressed the start of a fashion show at Blue Horizon Hotel entitled: “Glow” For the love of Fusion, Fashion and Form 2018. (FP)

Challenges confronting the island’s Micro, Small and Medium Enterprises (MSMEs), such as the apparel sector, will soon be met head on with a number of measures that include a Trust Loan Fund.

This assurance came last Sunday evening from Minister of Small Business, Entrepreneurship and Commerce, Dwight Sutherland as he addressed the start of a fashion show at Blue Horizon Hotel entitled: “Glow” For the love of Fusion, Fashion and Form 2018.

The show was the brainchild of entrepreneur and owner of Be.Kom.Innovative.Creative.Empowered, Michelle Ward.

Pointing out that he was “very well aware” of problems such as high production cost, access to finance and highly competitive imports, Mr. Sutherland said: “It is therefore my role to work with stakeholders such as you to identify how to make it easier to build out this sector. As a Government, we have said explicitly that just as you have taken a chance on us – we will take a chance on ordinary Barbadians, especially those left behind by the policies of traditional financial institutions, by providing $10 million per year for each of the next five years to seed a Trust Loan Fund to give to small business security-free loans of up to $5,000 each.”

He noted too that the apparel industry could look forward to something positive as it related to growing the economy and investing in small and micro businesses such as theirs.

Stating that his Ministry was tasked with the implementation of this Trust Loan Fund, Mr. Sutherland said they had been working assiduously on it, over the past few weeks, to achieve an early implementation by the end of July.

He noted too that they were also looking internally at processes and products such as those in Fund Access and asking whether what was being done was building a more innovative and entrepreneurial citizen.

“Entrepreneurship is characterised by taking risks and I am encouraging my officials to ask ourselves the critical question, if the way in which we do things is filling the enthusiasm cup that drives the entrepreneurial mind, or if we have become killers of innovation – with our preoccupation with processes.

“Information Technology and the fact that we live in a borderless world mean that you can produce your designs and apparel for a global marketplace. I am particularly interested in knowing how my Ministry can fuel this kind of global growth by all of you working in this sector,” the Small Business Minister indicated.

Those gathered also heard that a significant and substantive part of Government’s agenda, being worked on across several Ministries, was the need to digitise Barbados and make it easier for businesses locally.

Mr. Sutherland stressed they were also interested in ensuring that the youth, vulnerable women and girls, and persons with disabilities were given a hand-up and not a hand-out, through ensuring that Government contracts were earmarked for small community-based firms and businesses.

He concluded by noting that in addition to addressing the issue of access to finance and opportunity, Government would be focusing on reducing the high price of the inputs needed as far as possible.

“We will be vigilant and actively monitoring prices to ensure that benefits such as the removal of the NSRL are passed on to you the consumer. We will also provide direct feedback to the macro-economic planners on both the intended and unintended consequences of budgetary and other financial policies on the small business sector,” he pledged.