Jordans Praised For Maintaining Its Brand 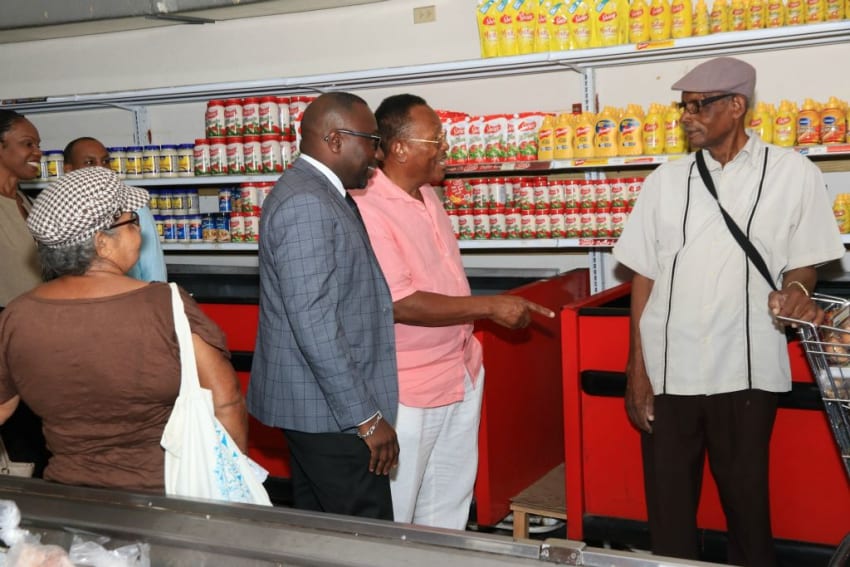 Minister of Small Business, Entrepreneurship and Commerce, Dwight Sutherland and Chief Executive Officer of Jordans Supermarket, Audley Jordan, chatting with a customer during a tour of the supermarket in Fitts Village last Friday. (D.Crichlow/GP)

The Jordans Supermarket chain has come in for praise for “staying in the trade of the supermarket business” and helping to build Barbados over the years.

Minister of Small Business, Entrepreneurship and Commerce, Dwight Sutherland, in giving kudos to the Jordans said they had helped to build out commerce on the island, by employing over 300 persons and providing employment for distributors and retailers. He was speaking following a tour of the Fitts Village branch at St. James, last Friday.

Mr. Sutherland added that it was noteworthy that the Chief Executive Officer, Audley Jordan, kept the business as an indigenous one.  “He is what I would call an indigenous business, not that he is not able to import; he is able to import, but he chooses not to import products. So, most of the retailers benefit from Jordans.  He also provides employment for other small businesses,” the Minister said.

Noting that the Fitts Village entity prided itself on being the supermarket for the working class, Minister Sutherland further praised Mr. Jordan’s commitment to transporting shoppers and his adherence to standards and good pricing.

The tour of the St. James supermarket formed part of the Ministry’s outreach programme designed to improve its strategic alliance with all stakeholders.

Elaborating on the outreach programme, Mr. Sutherland said: “What we recognise here as a Government is that we cannot sit in our offices and expect to build out commerce in this country.  We have to come to the supermarkets and see what is going on, and indeed do what we can do in terms of setting policy, so that all supermarkets and all businesses continue to thrive especially at a time like now when we are going through our economic recession.

“And, we know that growth in this country will come from the business sector and indeed our supermarket and our commerce are critical to building out this economy and to seeing growth within the next three years as we go through our restructuring.”

Meanwhile, Mr. Jordan said his secret to success in the business had a lot to do with the long hours he had put in as a young man, some 14 to 15 hours a day. Stating that the business had changed over the years, the 80-year old noted that with the advent of the supermarket business in the 1960s, the middlemen had been phased out, and this meant going directly to the provision merchants.

“Moving from shop to supermarket was much better; the shopkeeper years ago used to operate on 10 and 12 per cent mark-ups. Going directly to the provision merchants, they used to operate on a 25 per cent mark-up, but nowadays with the competition, you have to drop mark-ups by 10 per cent or 15 per cent to stay in business; if you want to be in business.  You can’t stick to those mark-ups anymore,” he said.