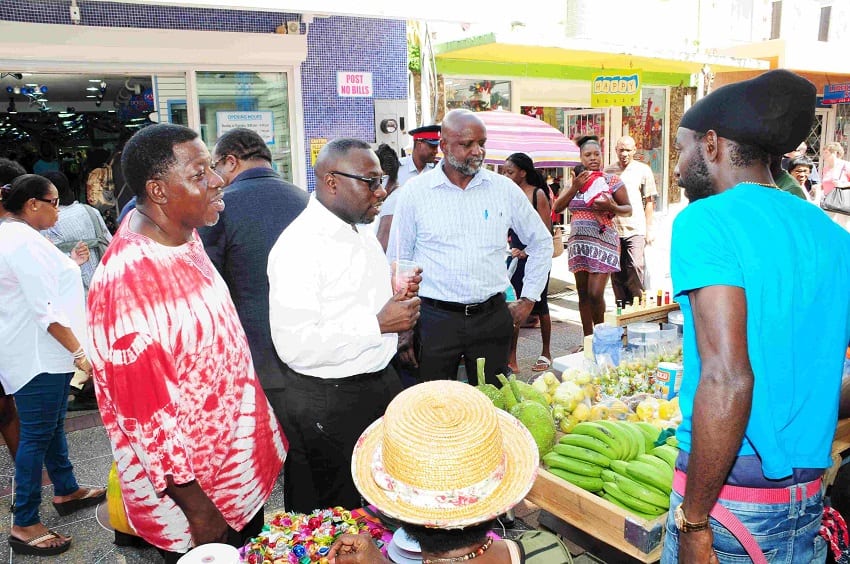 Minister of Small Business, Entrepreneurship and Commerce, Dwight Sutherland (centre), chatting with a vendor while on a tour of Swan Street today. He was accompanied by officials of his ministry and President of the Barbados Association of Retailers, Vendors and Entrepreneurs (BARVEN), Allister Alexander (left). (B.Hinds/BGIS)

Government will treat vending in the same manner as it treats the tourism product says Minister of Small Business, Entrepreneurship and Commerce, Dwight Sutherland.

This was emphasized today as the Minister ended a tour of Swan Street after interacting with several vendors.

“From here onward, we as a Government will treat to vending the same way we treat to the tourism product.  I would love to see decorative carts on our highways and byways; coconut vendors must have the space whereby when you come as a tourist to this country we create the space and the infrastructure whereby coconut vendors are seen as fundamental to our product, to our economic development and to our tourism product.

“Gone are the days where we are going to see coconut vendors as nuisances. So, I just want people in Swan Street to understand where this Government is taking vending.  Vending is part of our heritage, part of our culture and we intend to ensure that we create the environment and also the space whereby vending can be seen as indeed a critical part of building out commerce in this country and indeed a way of life. So, we give credit to vendors for doing what they have done in the past – raising their children; adding to GDP, in their own way, but gone are the days when you will see vending as a nuisance,” he said.

Minister Sutherland also urged more respect for vending, which he noted had been a way of life from the days of slavery with people plying their trade, selling fruits and other items to feed their family.

Adding that vending had taken people in this country out of poverty and sent many children to school. He gave his support to the vendors, noting that his grandfather too had been a vendor in Ellerton, St. George.

“We just need to give them the respect that is due to them and also give them the space that they require to be part of the economic landscape of this country,” the Minister reiterated.