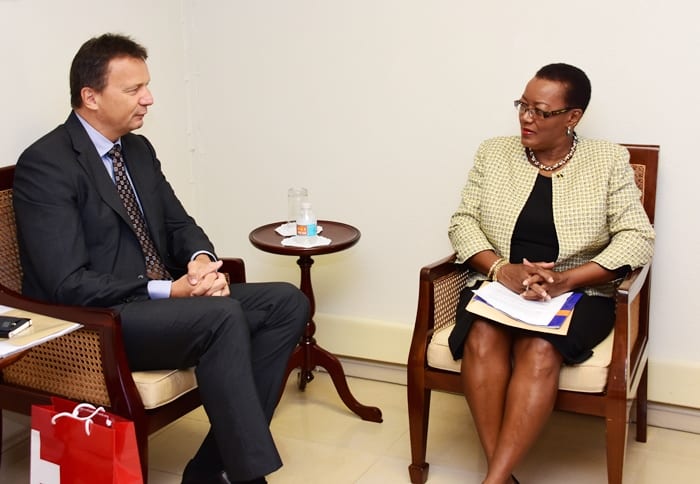 Minister of Foreign Affairs and Foreign Trade, Senator Maxine McClean and Switzerland’s Ambassador to Barbados, Didier Chassot in discussion during a recent courtesy call at the Ministry of Foreign Affairs. (C.Pitt/BGIS)

Ambassador of Switzerland to Barbados, Mr. Didier Chassot has presented his credentials to Minister of Foreign Affairs and Foreign Trade, Senator Maxine McClean.

According to the Ambassador, Switzerland was committed to strengthening its relationships in the region and its plans for Barbados included collaborating on matters related to tourism and cultural affairs.

He also expressed a desire to offer assistance in the implementation of relevant monitoring systems that would ensure the protection and preservation of the island’s UNESCO World Heritage sites.

Senator McClean agreed and added that Barbados was also interested in deepening bilateral relations in the area of tourism, as well as education and training opportunities for students and teachers.

She said that the Government of Barbados was also desirous of negotiating a new Double Taxation Agreement with Switzerland, given the outdated status of the current one which was signed between the United Kingdom and Switzerland in 1954.