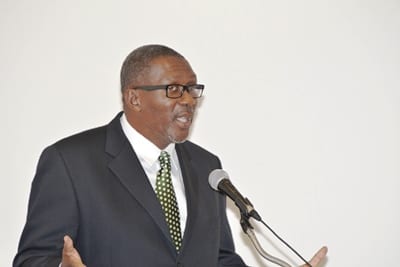 A symposium on renewable energy sponsored by the Barbados Light and Power Company Ltd. (BL&P) and held collaboratively with the Media Resource Department (MRD) has been described as “fitting well with the National Sustainable Energy Policy of Barbados”.

The comments came today as Parliamentary Secretary in the Ministry of Education, Science, Technology and Innovation, Senator Harry Husbands, addressed the start of the event at the BL&P’s headquarters on Bay Street, St. Michael.

Lauding both entities for bringing awareness to teachers and students, he said the seminar was a “manifestation and a coming to life” of all Government’s policies. Mr.  Husbands said it fitted well with policy which identifies five key areas of focus.

He further explained that Government’s policy was committed to ensuring that the public was aware and informed of all matters related to energy resources.

The Parliamentary Secretary added that Government also recognised the importance of cooperating with the business and NGO sectors for the development and awareness of these sustainable energy goals.

Senator Husbands also stressed Government’s commitment to ensuring the acquisition of satisfactory knowledge to those who currently work in the sector or would do so in the future, and urged teachers to also consider their own interest in renewable energy.

BL&P Managing Director, Roger Blackman, in expressing pleasure at their relationship with the MRD, said: “We are just as excited about working with the people of Barbados as we create a sustainable future for all.”

He spoke of the “exciting projects” the BL&P were pursuing, making mention of the new 10 mega-watt solar farm in St. Lucy and his company’s 100-100 vision. Of the latter, he said: “What this represents is a transition to 100 per cent renewable energy and 100 per cent electrification over the next 25 to 30 years.”

The BL&P official noted too that they had also invested in grid modernisation, the creation of a smart grid and an advanced metering infrastructure that will start this year and involves the installation of 130,000 meters, over the next three years.

Stating that all this would allow for the introduction of new energy services to customers, Mr. Blackman stressed it would also mean no more interim and estimated bills and would facilitate higher levels of distributive renewable energy systems.

“The aim is to give customers greater control over their energy use,” Mr. Blackman explained.