Syphilis Cases A Concern For Ministry

The Ministry of Health has stressed the importance of all persons in Barbados continuing to educate themselves about Sexually Transmitted Infections (STIs) and doing all in their power to prevent transmission of these diseases.

Senior Medical Officer with responsibility for HIV and STIs, Dr. Anton Best, made the declaration today as he revealed the results of a detailed analysis of an outbreak of syphilis in Barbados.

He explained that the outbreak was first detected in 2013 and the Ministry immediately put systems in place to improve syphilis surveillance in Barbados. The just-completed report analysed trends in new cases over a four-year period between 2011 and 2014.

According to the Senior Medical Officer, the study revealed a significant increase in the number of syphilis cases between 2011 and 2013. Subsequently, the outbreak stabilised in 2014 and 2015, he added.

The study investigators, concerned about the potential for syphilis to be transmitted to babies, also looked at syphilis testing trends among pregnant women.

The Senior Medical Officer said they found that very high proportions of pregnant women, more than 95 per cent, were screened for syphilis during pregnancy.

The report stated that no increase in syphilis cases in pregnant women was detected during the four-year period under review. There was, however, one case of congenital syphilis in 2014.

According to the Senior Medical Officer: “The Ministry of Health first raised the alarm in July 2013 and commenced a health education campaign to increase awareness about STIs so more people would be tested for them and protect themselves from acquiring them.”

The health official explained that syphilis was a sexually transmitted infection that could cause serious health problems if it was not treated. 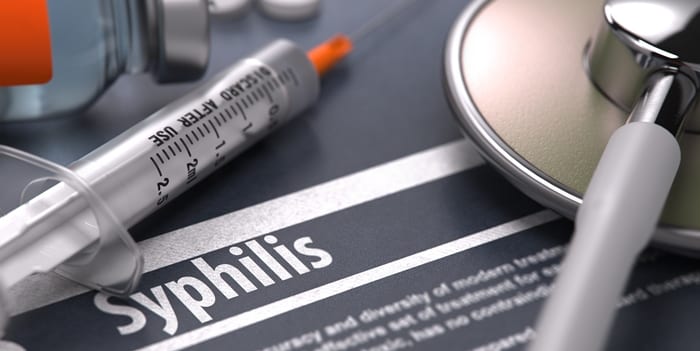 The health official stated that his Ministry’s HIV and STI Programme would continue to conduct ongoing surveillance for syphilis and other STIs in Barbados. He also reassured that the Ministry would also continue to implement strategies, including more aggressive health promotion and awareness, to prevent and control the spread of STIs and HIV.

Additional data on HIV and STIs in Barbados may be obtained by e-mailing hivstisurveillanceunit@health.gov.bb. For general information on HIV and STIs, persons may contact the Ministry of Health’s Help Line at 467-9500.