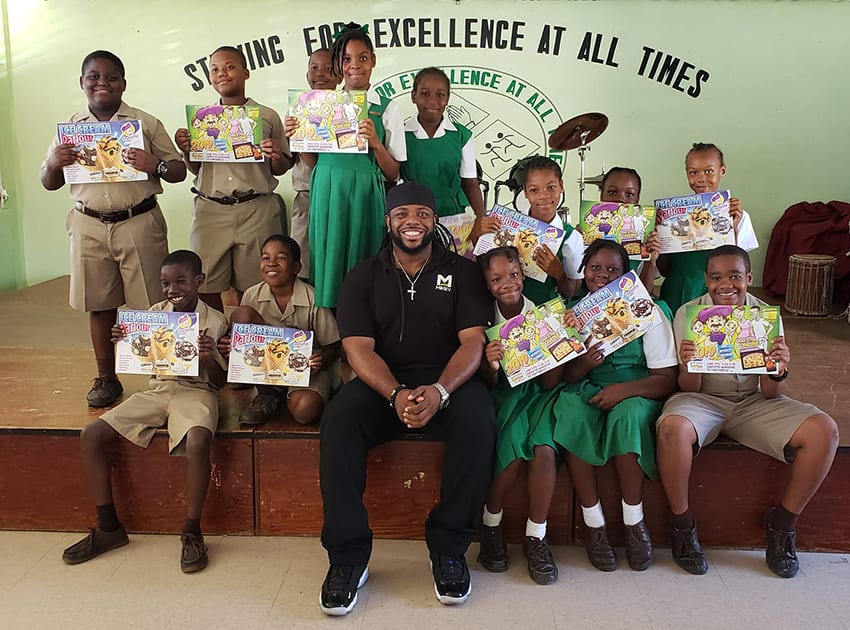 Michael “Mikey” Mercer poses with students of the Ignatius Byer Primary School. The Team Mikey Charity has been supporting children who do well in the Barbados Secondary Schools Entrance Examination. (GP)

For the last five years, his charity, The Team Mikey Charity, has been easing the financial burden of parents whose children have done well in the Barbados Secondary Schools Entrance Examination (BSSEE).  The charity awards the top students in the BSSEE.

Each year, the charity selects two schools, and the top students are provided with school uniforms, shoes, games clothes, laptops and book bags for their first year of secondary school.  Mr. Mercer and his team also assist with the students’ school fees.

This year, the top students in the BSSEE at the Ignatius Byer Primary and Wesley Hall Junior schools will be on the receiving end of the entertainer’s generosity.

Wesley Hall Junior, his alma mater, is usually chosen each year along with another primary school, but he has also given scholarships to Queen’s College.  He is intent on giving back and emphasizing to children how important it is to have a sound education.

“Education has always been a really big thing for me.  [I want children] to understand that no matter what you are looking to do job wise, you need to get an education.  This economy is really hard, so we are trying to give back and give some incentive too…, and this may sound strange, but some children are trying not to seem intelligent because they are bullied, so we are trying to motivate them to continue to do well in academics,” Mr. Mercer explained.

Also an ambassador for Chefette Restaurants, the entertainer usually gives regular talks to students at schools around the island.  One of those talks was at the Ignatius Byer Primary School in Lowlands, St. Lucy, recently.

He confessed that before going there to address the students, he did not know that the school even existed. As a result, his charity plans to offer scholarships to at least two “non-central” primary schools each year, since “they are often left out”.

The Team Mikey Charity has awarded scholarships to six students so far, but his involvement in the lives of those children does not end with the handing over of school supplies or a cheque.  He disclosed that he does follow-ups to see how they are adjusting to secondary school life.

“They are doing well, and to date, they are still very grateful as well as their parents.  It is a good feeling [to give back] and we are always happy to help,” he said.

Mr. Mercer urged other artistes to invest in the nation’s children. “There are a lot of children that need it.  You don’t have to do a full on scholarship; you can contribute to breakfast programmes or even adopt a school.  I would like to encourage the entertainers to band together and donate to schools.  It is an investment in our future.”

The charity has a goal of providing scholarships to five schools on an annual basis.