Temporary Outfall At Worthing To Be Constructed 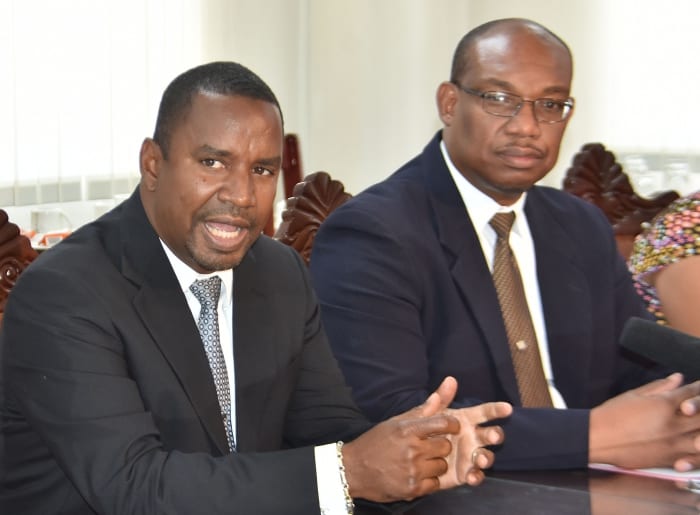 After experiencing a setback while conducting repairs to the force main at the South Coast Sewerage Project, Government has decided to install a temporary outfall at Worthing, Christ Church.

In addition, Cabinet has decided to seek funding to upgrade the Bridgetown Sewerage Treatment Plant from a secondary system to a tertiary system and to construct a new tertiary plant on the South Coast.

Minister of Energy and Water Resources, Wilfred Abrahams made these disclosures today during a press conference at his Ministry, in which he gave an update on the status of the South Coast Sewerage Project.

Mr. Abrahams explained that it was decided in September to utilize trenchless technology to repair the breach on the force main via epoxy liners. “We needed two successful installations with the liners in order for it to be considered secure enough to pressurize again; last week we were able to install the second successful liner and sought to pressurize the pipe,” he explained.

The Minister disclosed that on Monday, November 19, the Barbados Water Authority’s (BWA) south coast force main was flow pressure tested up to 40 psi and recommissioned. He added that also on that date, fluorescent dye was placed into the water’s flow to trace its path.

It was during this testing a discovery was made that either the liners had failed or there was another breach within the line, as wastewater was seen at the surge chamber at Hastings, Christ Church, and also portions appeared back at the plant within hours.

Mr. Abrahams stated that based on the ocean ecological studies conducted by Baird and Associates, Cabinet decided the way forward would be to construct a temporary eight-inch diameter outfall 1,000 metres offshore from Worthing.

He stressed that in making the decision to construct the outfall, Government took into consideration the flows, the currents and, how it impacts the near shore and the coral reefs.

Noting that Government had to balance a number of interests, the Water Resources Minister stressed: “I know the hoteliers and the public want the beach open; I know that the people responsible for the swamp and ecologists would like the sewage not to be going into the canals alongside the swamp; I know majority of the users in Barbados of Highway 7 do not want the road dug up….

“We’re having to balance all of those interests, but what informs the decisions that this Government is making, and our Ministry is making, are the safety of the Barbadian populace and visitors, the protection of our nearshore environment, including our coral reefs. The protection of the ecological system and the network that is the Graeme Hall Swamp is paramount…. No decisions are being made knee jerked or willy-nilly”.

He revealed that work on the outfall would commence within another week and would be carried out “around the clock”.  Simultaneously, he added, repair work would continue on the gravity main using cure-in-place pipe technology; this was expected to be completed by the end of this year.

Mr. Abrahams thanked the staff of the BWA for its tireless efforts towards the repairs to the force and gravity mains and gave special acknowledgment to BWA’s Project Manager, Stephen Lindo, who would be retiring at month-end after giving 49 years of service.