The 60-Year Journey Of Francis Pfarr

Our journey with retired Navy officer Francis Pfarr started with an email in December 2015, when he reached out to the Barbados Government Information Service (BGIS) about visiting the old naval base at Harrison’s Point, St. Lucy.

Frank, who worked on the construction of the base in 1956, would be on a stopover for a few hours while on a Caribbean cruise and wished to visit the former military facility and search for his old camp site. During his visit, a small crew from the BGIS accompanied Frank on his trek to the north of the island.

Eighty one-year-old Frank Pfarr, by his admission, has lived a very full life. He has served his country proudly, had a wonderful marriage and raised a beautiful family. He is a father of two, grandfather of six, and great grandfather of three.

He is also well travelled, journeying throughout the Caribbean and across Europe. But for all his travels, one place has remained close to his heart – Barbados. Frank’s love affair with this island started some 60 years ago while stationed here working for the United States Navy.

His first visit to Barbados was from September 1955 to January 1956, while a crew member of the United States Ship (USS) Aeolus. Following that, he was transferred to the Navy Base in Norfolk, Virginia, and then joined a support team which set up camps on various Caribbean islands, including Barbados.

Frank was deployed to assist in the construction of a radio tower in St. Lucy. The then 20-year-old was one of the two technicians, charged with setting up the tower used by Navy ships to triangulate and map the ocean floor for the laying of cables.

He was part of a group of six persons camped at River Bay – two electronics technicians, a Seabee driver, two engine men, and a cook under the charge of a commanding officer, who stayed off-site. 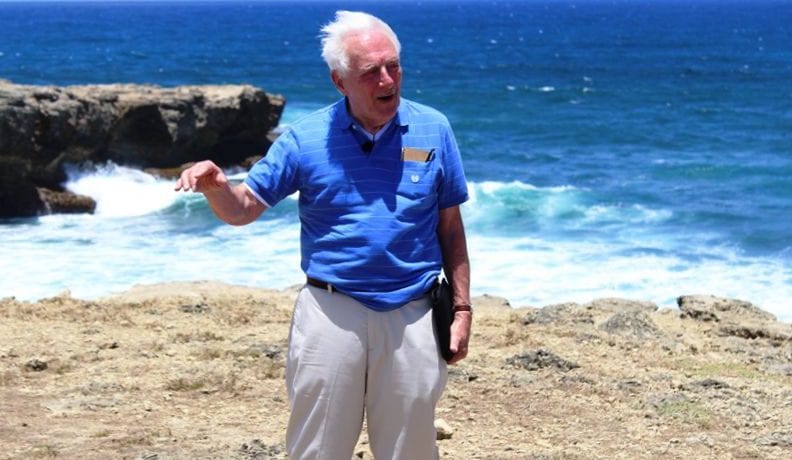 Frank showing the BGIS crew where he was stationed at River Bay, St. Lucy. (A.Skeete/BGIS)

During his stay, Frank fell in love with the island, and for the next 60 years he sought to return to the sites in St. Lucy which had captivated him so many years ago.

“There are so many memories. I loved it when I was here. I wanted to come back and see the places I stayed at when I was here. I tried twice before with my wife and family on our 25th anniversary in May 1983 but we didn’t make it [to the former camp site at St. Lucy] at that time,” he recalled.

Initially, Frank was scheduled to leave following the construction of the tower, however, due to his involvement as a witness in a local court case, he ended up staying longer.

He was then assigned temporary duty with the Navy’s Construction Battalion (Seabees), who were working on the construction of the Naval Facility Barbados at Harrison’s Point, St. Lucy.

Frank’s duties included wiring the barracks and installing electrical systems, cables and lights.  He worked on the base from August 1956 until he left the island a month later.

Frank has nothing but fond memories of his stay in Barbados. While the island was quite different from the United States, he immediately felt at home here and developed a close connection with the country and its people.

“The banana and palm trees and sugar canes stood out to me. I had never seen these things living in the northern United States, in a colder climate. It was a totally different way of life. Where I grew up, you wore a suit, coat and tie but here was so casual – short and floppies – it was such a relaxed atmosphere.

“And the people were just so friendly, pleasant and easy-going. They took you at face value and accepted you. It was something I had not experienced and I loved it.”

It was at River Bay that he spent time learning to spear fish, swim and dive. “There used to have turtles swimming in the cove and barracuda. I had a spear gun and one day a barracuda was swimming in circles around me and I pointed the gun at it and pulled the trigger and before the spear could get to him, he was gone. They were fast,” Frank recalls with a chuckle.

Many older Barbadians remember the fateful date of September 22, 1955, when the infamous Hurricane Janet impacted the island, and Frank also recalls that day quite well. While camping at River Bay, he had a close call after being caught in the middle of the storm.

“The tent that I was sleeping in blew down. I was such a sound sleeper that everybody else got out of the tent when it collapsed. The bar frame of the tent missed my head by four or five inches. I could have been killed.

“When the others realised I was still in there, they had to drag me out of that tent. We spent the rest of the night huddling down as best we could and getting drenched.”

Frank noted that even though Barbados has changed a great deal from the 1950s, the island had maintained its natural beauty and charm.

The 81-year-old has resided on the outskirts of Atlanta, Georgia, for the last 40 years, a home which he shared with his wife Lois, a registered nurse, until her passing in 2009. They were married for 50 years.

He regrets that she could not be here on this trip with him, to see the places which had such a positive impact in his youth. Frank is even planning a return trip to the island to help celebrate its 50th anniversary of Independence this month.

For Frank, it was a dream come true to finally revisit Harrison’s Point and River Bay, St. Lucy.  “I had dreamed of coming back here for 50 years. I never thought I would see here again. You have made a 60-year dream come true. Thank you,” he said with a smile.