The Art Of Moulaging – What Is It?

An “injured” volunteer being assisted by fire service personnel during a rescue simulation at Hotel Glendairy Meadows during Exercise Tradewinds 2017. (C.Pitt/BGIS)

These were some of the injuries volunteers “received” during the just concluded Exercise TRADEWINDS 2017, as buildings collapsed around them, they were struck by falling trees, or burnt following explosions.

However, none of it was real, as it was all part of the moulage which was applied to add to the realism of the exercise, themed: A Seamless States Partnership for a Secure Region.

The man who created the graphic injuries during the exercise was Colour Sergeant in the Barbados Defence Force, Rudolph Morris.

[x_blockquote cite=”Colour Sergeant, Rudolph Morris” type=”left”]“Moulage is injury simulation, similar to what is seen in films. What we would do is start with a simulation and understanding what the basic injury is and what you want to simulate.” [/x_blockquote]

Noting that he learned the art during his training for the medical troop, Colour Sergeant Morris said persons doing moulaging needed to have creative minds; to understand and see the actual injuries; and know what they looked like and how they could progress. “Then, you design the injury the way you want it to look,” he added.

The Colour Sergeant said the process was started by cleaning the “victim’s” skin, then affixing the moulding wax on the area which was to be simulated.

“Then, we would build it up. If we wanted a chop wound or crush injury, we would mould the wax into that shape. And, if we want it to look as if it went down to the bone or if we just want it to be the surface then we would design it accordingly,” he explained. 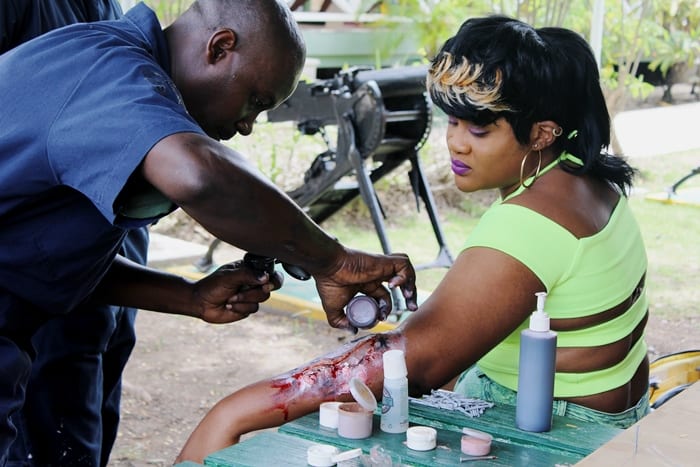 A volunteer having her make-up applied by Colour Sergeant in the Barbados Defence Force, Rudolph Morris. (L.Bayley/BGIS)

Once the person applying the moulage understood the makeup, then they were able to blend back the “victim’s” skin to the basic foundation, he added.

And, that is exactly what he did. Volunteers taking part in Exercise TRADEWINDS 2017 watched in amazement as he transformed their bodies to take on injuries likely sustained from falling trees and poles from an earthquake; burns from a boat explosion; injuries from a collapsed building; punctures complete with pieces of branches and metal “stuck into their flesh” and even eyes bulging out of the sockets.

Of course, the scenarios would not have been complete unless there was blood. And there was a significant amount of “bloodshed” during the exercise, as Colour Sergeant Morris ensured that responders had as close to a real life wound as possible through the use of “theatre blood”.

He explained that it was a powder to which water was added in order to create the effect of a bleeding wound. His only advice to volunteers – wear old clothes because it stains.

Although the “wounds” created by Colour Sergeant Morris would have been difficult for some persons to witness, there is no doubt that their inclusion in Exercise Tradewinds 2017 added to the realism and success of the simulation.