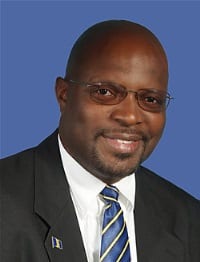 The Honourable Adriel D. Brathwaite, M.P. became a Member of Parliament for the constituency of St. Philip South in January, 2008.

He was reassigned this portfolio on February 22 following the success of the Democratic Labour Party in the February 21, 2013 General Elections.

The Hon. Adriel D. Brathwaite, MP was educated at St. Martins Primary – now Reynold Weekes Primary. From there, he entered Harrison College where he received his secondary education. On leaving Secondary school, Mr. Brathwaite entered the University of the West Indies, Cave Hill Campus where he gained an LL.B (Hons.). He is also the holder of the Legal Education Certificate from Hugh Wooding Law School.

The Hon. Adriel Brathwaite, MP was admitted to the Bar in 1987, and practised as a corporate lawyer until his appointment to the Office of the Attorney General on October 23, 2010.