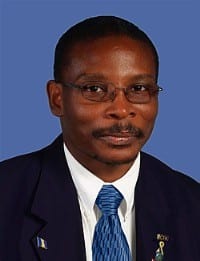 He was appointed Minister of Industry, Small Business and Rural Development on June 15, 2011. He is now in his fourth consecutive term as a Member of Parliament for the constituency of St. Lucy, having served three terms as an Opposition Member.

Mr. Kellman has pursued academic qualifications through the Barbados Institute of Management and Productivity (BIMAP), New Jersey College and the Certified General Accountants of Canada. An accountant by profession, he has operated his own business since 1987.

Prior to this, Mr. Kellman worked in the sugar industry, beginning as an office assistant at Haymans Factory in 1977, attaining the position of Accountant at the industry’s Head Office up to 1994. He was also an active member of Sugar Industry Supervisors Association (SISA) and spearheaded the fight for the protection of pension rights of workers in the industry.

As a Member of Parliament, Mr. Kellman has represented Barbados as a delegate at several Commonwealth Parliamentary Association (CPA) conferences in Australia, Canada, the Bahamas, Belize, Nigeria and Trinidad and Tobago. He is also a member of the Universal Federation of Peace.

Mr. Kellman has been active in the community for many years, from as early as 1971. He has contributed to several community events, sports and social clubs and was the first sponsor of Youth Milan Football Club. Mr. Kellman was also instrumental in the restoration of the Rockfield Community Centre and the development of North Stars Sports and Cultural Club.

Prior to 1994, he was a Member of the Executive of the St. Lucy branch of the Democratic Labour Party (DLP) for many years. Between 1999 and 2001, Mr. Kellman served as First Vice President and acted as President in 2001 of the DLP.

Minister Kellman is married to Paulevette and is the father of two sons, Paul and Russell. His recreational activities include listening to music, and playing games of dominoes, hearts and whist.