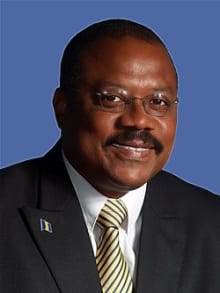 The Honourable John David Edward Boyce, M.P., was elected to the House of Assembly as the representative for the constituency of Christ Church South in January, 2008.

He received his secondary education at Harrison College and completed tertiary studies at the University of the West Indies’ St. Augustine Campus, where he graduated with a Bachelor of Science degree (B.Sc.) in Mechanical Engineering.

He later pursued post graduate studies and earned a Master of Science degree (M.Sc.) in Brewery Science from the University of Birmingham in England and a Diploma in Management from the Barbados Institute of Management and Productivity (BIMAP).

Mr. Boyce worked in the private sector as a Plant Manager at Banks (Barbados) Breweries from 1979 to 1992, and was a Director of that company from 1990 to1992. Considered a leader in energy conservation, he later established his own companies; Econergy Caribbean Limited and Rachel Pringel Brewery.

Mr. Boyce has also served on a number of statutory boards: the Public Utilities Board; the Christ Church Foundation School and Barbados External Communications Ltd. He was also President of the Association of Professional Engineers, and a Director of the Arawak Cement Company. He also worked on the Ministry of Labour’s Task Force on Unemployment in 1986.

Mr. Boyce was appointed Minister of Transport, Works and International Transport on November 24, 2008; and assumed the portfolio of Transport and Works on October 23, 2010. Following the victory of the Democratic Labour Party in the February 21, 2013 General Elections, he was assigned the Health portfolio on February 28, 2013.

He is married to Carolyn Boyce and he is the father of one son, Kevin.