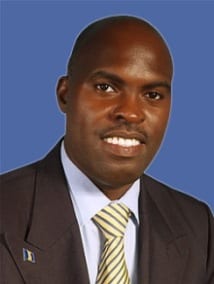 The Hon. Michael Andrew Lashley, M.P. is an Attorney-at-Law who was educated at the Garrison Secondary School and the Barbados Community College.

Following this he went on to pursue his law degree at the University of the West Indies, Cave Hill Campus and then Sir Hugh Wooding Law School and was called to the Bar in October 1995. Mr. Lashley specialises in Criminal Law and was a partner with the Law Firm of Simmons, Chandler and Lashley and also a part time tutor in Law at the Urban Adult College.

He is a former President of the Barbados Law Students’ Association at the Sir Hugh Wooding Law School and a founder member of the Garrison School Old Scholars’ Association. Mr. Lashley entered elective politics in 2003 on a Democratic Labour Party ticket and contested the St. Philip North Constituency seat.

He was successful in capturing that seat. As the Minister of Housing and Lands he sought to provide housing solutions to hundreds of Barbadians to help them acquire a home and reaped great success in doing so.

He contested the St. Philip North Constituency seat again in February 2013 and was once more successful in retaining that seat. He is presently appointed as the Minister of Transport and Works where his main objective is to maintain and develop Barbados’ road infrastructure and improve its system of transport.

Mr. Lashley is an avid supporter of sports and culture in Barbados. His love for people and his leadership skills have seen him spearhead many initiatives in the parish of St. Philip. Among these in particular was the St. Philip’s Carnival Committee which he co-founded to keep the art form alive in that rural parish.

He is also an active member of the St. Catherine’s Sports Club, a club with a long and rich history which participates in the Premier League Division in Cricket in Barbados.